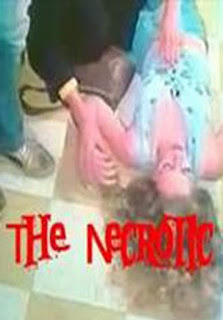 Remember an independent New Jersey-based label called Vidimax who put out a few homemade horror movies in the 1980s? Me neither. This is one of their ultra-cheap direct-to-video releases and it probably didn't manage to make its way to many video stores during its day. A woman goes to a doctor for a throat infection, gets an injection of something and ends up going home and getting sick. Meanwhile, a biker named Howie (Anthony La Russo) encounters a young, blonde female drifter named Alicia (Regina Kelly) out on the street. Howie still lives at home with his parents by court order for dealing drugs and Alicia's just your typical female runaway looking for a place to stay. Famished and fatigued, Alicia passes out at a diner. Thankfully, Dr. Steven Steiner (Rodney Williams), a friendly-seeming recent widower whose wife has only been dead a few months, is there to help out. He takes her back to his clinic so she can get some rest, tells her that Howie just left her there even though he told him to go home and then decides to let the girl come stay in his home with him, despite warnings from his cautious and level-headed sister Deana (Lori Smith).

Dr. Steiner starts treating Alicia like a queen; giving her spending money and taking her out to dinner. While Alicia is out window shopping, she runs across Howie again and the two spend the day frolicking around in a long music montage set to a cheesy love song called "Look at Me Now." Then we learn that a medical examiner is investigating the good doctor. Apparently, many of the patients who showed up at his clinic with only minor injuries ended up dying soon after receiving treatment. So what's Dr. Steiner up to? Well it has something to do with administering shots of curare (poison) instead of Penicillin and Cortisone and something to do with some strange bedside habits involving a few corpses (including one belonging to his dead wife). At least that's what I made of it.

Technically speaking, this is about as incompetent a production as you'll see. It reminds me a lot of the movies friends and I made in high school. It's flatly photographed, the sets look like porn movie sets, the editing is downright brutal, a few very brief gore insert shots of autopsies seem to have been tacked on at a later date and the end sequence is one of the most sloppy and nonsensical I've seen. What's worse is that the sound quality is consistently awful and much of the dialogue is difficult to hear. In fact, there are several scenes where badly inserted music intentionally drowns out the dialogue. One sequence unwisely filmed near a busy road starts with a hard-to-hear dialogue exchange between Alicia and Howie and ends with them standing around moving their lips while a heavy metal song (by some group called Metal Church) is played over top... for like over a minute.

It's kind of fascinating in a cheap / terrible movie sort of way and I actually did enjoy some of the scenes and performances. Two things I'm not going to knock are the plot and the actors. While this story is hardly anything new, it did manage to keep my interest for the most part. The actors ranged from tolerable to awful, but some of them delivered lines like the people in John Waters movies and I kind of liked that. The actress playing Alicia reminded me a lot of the late Cookie Mueller and the doctor sounded a little like the late David Lochary. The movie is also surprisingly tame, with very little profanity and almost no violence. There is a bare breast seen for about one second and a tiny bit of blood, but these shots seem like they were edited in later and aren't going to fly for the people wanting to see a cheap exploitation horror.

The uncut version of this film runs only 44 minutes, but the version I saw ran just 39, and that's including about five minutes of credits. It claims to have been re-edited and re-mastered in 2007 by a group called Questar Media, but looks just like any other terrible VHS to DVD transfer.