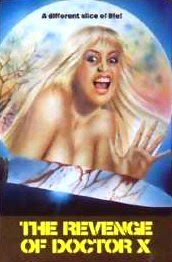 
Let me tell you, Regal did a bang-up job finally bringing this lost classic to video. Not only did they cheaply re-use the box art from one of their other movies, but they also re-used the freakin' credits from THE MAD DOCTOR OF BLOOD ISLAND (1969), never mind the fact that this movie doesn't actually have a naked blonde about to get slashed in it, doesn't star John Ashley and wasn't actually directed by Eddie Romero. It was actually directed by Kenneth (THE MANSTER) Crane and was written by none other than the master himself, Edward D. Wood, Jr., who may have been surprised that his script (called VENUS FLY TRAP originally) ended up being filmed in Japan by the Toie studio. Just like MANSTER, it's a US/Japanese co-production and is laughable on just about every conceivable level. Both films have almost identical endings. The star is former matinee idol and western star James Craig, who delivers the most embarrassing, over-the-top performance imaginable as rocket scientist Dr. Bragan, who we first see sitting at a desk having a temper tantrum about how stupid it is to build rocket bases in Florida. Taking the advice of his assistant, Bragan decides to head off to Japan for a relaxing extended stay, but first stops off in North Carolina to become unnaturally enamored with a Venus Fly Trap plant. He takes it with him to Japan and is greeted at the airport by the delectable young lotus Noriko Nakamura, the very accommodating cousin of his NASA co-worker. During dinner, he demands a huge, secluded greenhouse to conduct his top-secret experiments at and his lady friend knows just this place up the road, to the left and past the nearest active volcano. And whaddaya know, it turns out to be the ideal stomping grounds for your standard mad scientist, complete with a semi-retarded hunchback groundskeeper and a greenhouse large enough to comfortably house the carnivorous plant monster to come. Noriko also convinces the extremely abrasive doctor in her soothing phonetic cue card reading tone to let her stay and help with his experiments.


Like many Wood protagonists, Dr. Bragan is a man obsessed. Usually its with the touch and feel of angora sweaters, but here it's with plant life. During a trip to the beach, Bragan encounters a quartet of topless female scuba divers who help him acquire a rare, poisonous underwater plant. Being the rocket scientist he is, he naturally knows all about botany and splicing together plant species and such, so he combines the two plants together and a la Frankenstein uses lightning to revive the specimen. Bragan keeps it alive by feeding it bunnies and mice, but is still not satisfied that his creation cannot walk, so he sneaks off to the local sanitarium to steal "blood of the human heart" from a topless female patient. Of course, an injection of this instantly makes his creation take baby steps to become the killing machine it was destined to be. To be more precise, a walking Plant Man monster with Venus Fly Trap arms that that the doc has named "Insectivorous." And even though the townspeople eventually show up waving torches in anger, the creature never gets to realize its full murderous potential by only getting to eat a puppy, mangle the groundskeepers face and kill just one stupid village kid who wants to share his doll with the monster. The best the doctor can do during the completely unexciting finale is try to lure it over a cliff by using a goat as bait.

There’s nothing else to really say about this obscure, laughable cheapie. It's full of quotable bad dialogue, so Ed Wood fans can immediately add it to their "must see" list. The monster was Z movie coolness. James Craig, who worked out his schlock movie chops again in 1970 with an appearance in BIG FOOT, gives a bipolar performance that's just plain bizarre.


SBIG
Posted by The Bloody Pit of Horror at 5:33 AM