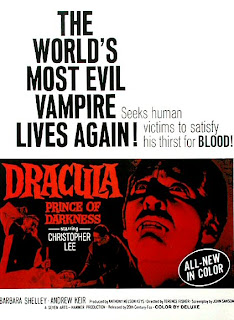 Hammer Studios wanted to make an immediate sequel to their international hit HORROR OF DRACULA (1958), but star Christopher Lee did not, so they made the unrelated vampire movies BRIDES OF DRACULA (1960) and KISS OF THE VAMPIRE (1962) instead. A few years later, Lee changed his mind and headlined a long series of Dracula sequels; the first of which was DRACULA: PRINCE OF DARKNESS. After a narrated replay of the original film's ending with Van Helsing (Peter Cushing) pulling down the curtains on Count Dracula (Lee, naturally) before staking him, this new story (with a Victorian era time setting) begins. Brothers Charles (Francis Matthews) and Alan Kent (Charles "Bud" Tingwell) and their wives Helen (Barbara Shelley) and Diana (Suzan Farmer) are British tourists vacationing near a desolate region of the Carpathian Mountains. They stop at a tavern, where villagers live in fear of vampirism and friendly, rifle-wielding vampire expert and monk (!) Father Sandor (Andrew Keir) warns them to steer clear of Carlsbad, where they were intending to go.
.
Despite super-prude Helen's best attempts to talk them out of it, they continue on as planned, but when they near a large Gothic castle, the coach driver refuses to go any further, pulls a knife on them, kicks them out, throws out their luggage and says he'll be back at dawn; leaving them stranded out in the middle of nowhere. Despite super-prude Helen's insistence they sleep in a woodman's shack and not go to the castle (they'd been forewarned by the monk), a driverless coach mysteriously pulls up, they climb on board and the horses head straight for the castle. Despite super-prude Helen's bad vibes about the castle looking "frightening," the horses take off again with their luggage on board and the four are forced to enter, where they find that preparations have already been made for four guests (plus their missing bags are already upstairs in the bedrooms). Despite super-prude Helen's constant bemoaning that all of these events are incredibly weird, sinister and/or evil and that they should serve as some kind of warning to high tail it outta there, the rest of the gang think she's just exaggerating. Well, they should have all listened to super-prude Helen.

Before long, a tall, glowering butler named Klove (Philip Latham) pops in scare the bejesus out of the ladies, serve up some dinner and tell them that his "master" Count Dracula is already dead, but in his will wanted to keep the home open for guests and waylaid travelers. Later on that night, Helen is awoken by someone calling her name and loud footsteps. She wakes Alan and the two catch sight of Klove dragging a large trunk through the hallway into a secret room hidden behind a tapestry. Alan follows and ends up getting stabbed to death by the faithful servant. Klove then hangs him upside down over Dracula's crypt, slits his neck over the vampire's remains, where the blood (there's a lot of it) helps to revive the red-eyed bloodsucker. This time-lapse special effect is very good for the time and cleverly employs some fog to help camouflage the fact they had to stop the camera at least a half dozen times for the desired effect. Helen is lured into the secret room to become Dracula's very first victim. The next morning, Charles and Diana manage to escape after discovering that Alan is dead, Helen has been turned into a vampire and that Dracula has returned to life.

So far, so good. The first hour or so of this film is very atmospheric and very good. However, the momentum is lost once the surviving couple make it to the monastery and join Father Sandor in fighting off the undead (who show up to try to get their hands on Diana). Toward the end, Sandor reveals that vampires can be killed by running water and the finale is a battle between Charles and Dracula atop a frozen pond. Hmm. Lee isn't on screen as much as I'd like and doesn't have a single line of dialog here (unless you count hissing and screaming as he dies), but delivers plenty of imposing menace when he's present. Shelley has a lot of fun playing opposites here; going from stuffy and bitchy (dressed in restrictive clothing and tied-back hair) to seductive and evil (in a loose gown and letting her hair down). It is one of the actresses best roles, actually, and she has a great death scene being held down by monks and staked! Philip Latham is great as manservant Klove, who is thankfully played not as a half-wit, but as a calculating, smart and menacing emissary of evil almost on part with his master. The rest of the cast acquit themselves very nicely, as well. Since they removed the Renfield character from HORROR OF DRACULA, they try to make up for it here with "Ludwig" (Thorley Walters), a mentally-disturbed monk who eats flies and helps out Dracula.

Hammer’s Dracula series continued with DRACULA HAS RISEN FROM THE GRAVE (1968), SCARS OF DRACULA (1970), TASTE THE BLOOD OF DRACULA (1970; with Linda Hayden and Ralph Bates joining Lee), DRACULA A.D. 1972 (1972; this marked the return of Peter Cushing to the series after an over-a-decade long absence), THE SATANIC RITES OF DRACULA (1973) and LEGEND OF THE 7 GOLDEN VAMPIRES (1974; with John Forbes-Robertson filling in for Lee).
★★1/2
Posted by The Bloody Pit of Horror at 1:59 AM