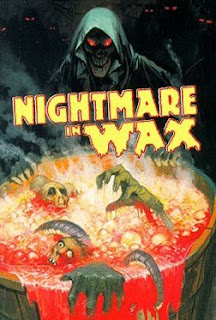 Along with his turn in the supa-sleazy 'classic' THE TOOLBOX MURDERS (1977), this is considered the ultimate bad Cameron Mitchell horror effort. It's a little too slow-moving for my tastes, has zero likable characters in it and not much action until the very end, but Mitchell's dedicated central psycho performance as vengeance-minded whack-job Vincent Rinard is fun. Not Anthony Perkins good, mind you, but definitely fun enough. As a spoof of the shallow conceit that is Hollywood, it's only so-so; as a horror movie it's also only fair. And even as just a simple vintage exploitation picture, it's just OK. I'm a big fan of the unnecessary gratuitous dance sequence, so I was also thankful for the appearance of the Gazzarri Dancers, who just rule. Five of them do a crazy hair-thrashin', floor-slidin', hip-shaking' go-go dance routine to "Don't Cry, Look For the Rainbow" by the T-Bones. Watching these ladies bounce around with huge smiles on their faces in their fringe-covered bikini top and parachute pants ensemble is a defining reason why I give this a slightly higher rating that usual. And now through the magic of YouTube, you can now watch the Gazzarri girls and the, uh, T-Boners (?) in action!

Former movie make-up man Vincent Rinard ("The best since Lon Chaney!") goes after people at Paragon Studios. A flashback shows how Max Black (Berry Kroeger), a jealous and drunk studio executive, flung wine in Vinnie's face right when he was about to light a smoke. He's engulfed in flames and dives into a pool, but not before scarring up one side of his face and losing an eyeball (not to mention his sanity). Now employed by the "world-famous" Movieland Wax Museum in Buena Park, California, Vincent uses a special serum (described as a mixture of truth serum, nerve medicine and special "vitamins and minerals"... Watch out Centrum!) to paralyze victims. They disappear and the dense detectives on the case (headed by Scott Brady) act baffled as new 'statues' are put on display in the museum. Vince talks to himself ("I'm a terribly nice man!"), chain-smokes, mumbles, hisses and describes how he gets "excited" by the sound of a woman's scream.

He also has to deal with a bunch of back-stabbing scumbags and self-absorbed witches, most of whom will deserve what's coming to them. There is also Nick (Hollis Morrison), a boozy, inept museum tour guide who sees a 'statue' blink, but doesn't go to the cops. Aside from Max (a real Grade-A jerk... who doesn't even die!) and the stupid cops, the other two lead roles are women and both are pretty atrocious. Marie Morgan (Anne Helm) is not your typical innocent heroine; this tramp has been engaged to no less that five different characters in this movie (!), including Vince, Max and two of the wax dummies/missing male stars (I guess she never had time to make a go at the one missing girl). For some reason, she also begs and pleads in her irritating baby-voice for Vince to give her a 'replica' of the head he's designing of the newest missing actor (and fiancé Number 5) Tony Deen (Phillip Baird). She doesn't know that Vince has already jabbed a syringe in the back of his neck, but I love it when Mitchell dryly agrees with her demands "so you can completely retreat for reality." He also wants her to 'pose' for him, which means she's eventually held prisoner in a box. Unfortunately, the box has a hole where her head sticks through so we have to continue getting aurally assaulted by her high-pitched whines.
The other "woman" is Theresa (Victoria Carroll), one of the aforementioned go-go girls. She's first seen proving she is thoroughly rhythm-deficient by jiggling on stage in a lime-green bikini. Theresa is tolerable before she talks, but when you realize her grating presence combines the abrasiveness of Lorraine Bracco with the airhead mentality of the Landers sisters, you wish Vincent would inject her with the serum as soon as possible. Unfortunately, we're first subjected to a scene of her making endless demands to the studio head honcho and running around in the museum trying to avoid Mitchell. She and the rest of the characters are completely unsympathetic, but function as a way to poke fun at the Hollywood system in general, I guess. And I'm probably giving this movie more credit than it actually deserves. The pluses are few and far between, but (other than Mitchell, the band and the fringe-worthy dance routine) include, colorful, slightly stylized lighting and a bizarre ending that seems to suggest that Rinard will be severely punished for his crimes by spending the rest of his life in his own personal hell... Married to Marie! Yikes, now that is scary.
.
So good it wasn't released until 1969.

Also in the cast are director John "Bud" Cardos (also the production manager) as a police sergeant, James Forrest as a film director, Virgil Frye as a statue, Rini Martin as a dancer and Kent Osborne as a bartender. Many of the people who worked on this one (including executive producer and script-writer Rex Carlton) also worked on the Al Adamson movie BLOOD OF DRACULA'S CASTLE and other atrocities.
★★
Posted by The Bloody Pit of Horror at 9:21 AM