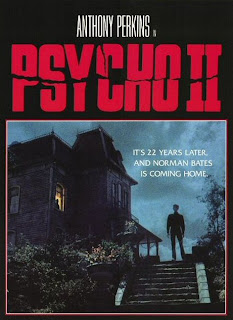 
Rehabilitated, Norman Bates (Anthony Perkins) returns to the Bates Motel after spending twenty-two years in a state institution for the murders committed in the first film. After getting a job in a diner and returning to the motel to try to live a normal life, he thinks he's losing his mind after receiving notes and phone calls from "mother." Then the murders start up again... Has Norman returned to his old ways, are others conspiring against him or is it perhaps a combination of the two? Could it have something to do with co-worker Mary (Meg Tilly), who starts to live with Norman after her boyfriend kicks her out? You know how mother loathes "whores." Or bitter and vengeful Lila Loomis (Vera Miles, returning from the original), who doesn't seem too happy that Norman was able to walk a free man. He's actually not on the good side of many in his small town, including sleazy hotel manager Dennis Franz, and others at the diner and around town who are very well acquainted with his history. After a badly cropped and unnecessary recap of the Janet Leigh shower death in the 1960 classic, this picks up in a big way and becomes a surprisingly worthy sequel. One could nit-pick and deconstruct it and unfairly compare it to the original, but as far as 80s horror sequels go, this is by far one of the superior ones; suspenseful, scary, very well acted and extremely well crafted.

Director Franklin does an excellent job setting up the shock scenes and building suspense, all with great respect for the style and humor of The Master. Restraint is used for the most part when it comes to gore (with some mainly sliding in at the very end), and there are many deliberate and knowing camera angles that instantly bring the films of Hitchcock to mind. The ending possibly goes too far, but it's still a surprise I doubt many people will see coming. One of the major reasons for this film's success however is the outstanding central performance from Perkins, who manages to pull off being sincere, sympathetic and creepy all at once. Regardless of how batty Norman becomes throughout the film, Perkins has made sure he's human first and foremost; never a cardboard cut-out. Many of the supporting cast (including Hugh Gillin, Robert Alan Browne and Lee Garlington) returned in PSYCHO III, which was directed by Perkins himself. The score (also fashioned with respect to composer Bernard Herrmann) is from Jerry Goldsmith. Look out for that peephole scene!