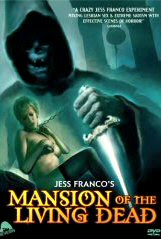 ...aka: Mansion of the Living Dead


Jess claims this one’s an attack on the Catholic Church. If you’re anything like me, all you’ll probably see is a tropical titty flick; simple Euro sexploitation in its purest (and silliest) form. I had no expectations at all going into this one (still basically cutting my teeth on the director's work), but I really can’t recall spotting much in the way of satire, commentary or anti-religious sentiment, as its only goal seemed to be to get the female cast members as naked as possible and getting them to participate in graphic lesbian scenes. Did I misunderstand it? Who the hell knows. The appeal of most of the Franco films I've seen has been completely lost on me. MANSION is goofy, lame, laughable, padded out, exploitative, badly paced, horribly scripted, amateurishly acted and, worst of all, exceedingly boring. To make things seem even more desperate, those expecting a zombie horror flick like the title (and ad art on the Severin DVD) implies will find the terror scenes are not only very skimpy in content, but also so few and far between that this barely merits being called a horror film. And what is the deal with the title? I don’t recall there being a mansion; just a large hotel and a monastery. Furthermore I’ve seen this listed as a spin-off on Amando de Ossorio’s Blind Dead series, which it’s most certainly not. Oh well. As one wise bloke once quipped “There’s no truth in advertising.”
.
As the film opens, we’re introduced to four giddy, giggly, barely-clad, fun-loving women and as much as I hate to dwell on the physical attributes/appearances of the actresses, since this movie is mostly about nudity and sex, it seems appropriate. Easily the best-looking of the bunch is Caty (“Jasmina Bell” / Elisa Vela), who is very attractive, looks like she’s in her early 20s and is of Asian origin. Lia (“Mamie Kaplan” / Mari Carmen Nieto) looks about 15-years older, has a pretty awful haircut and looks like one of those over tanned barflies who still has it going on the body department. Having the exact opposite problem is Lina Romay, playing “Candy” using the name “Candy Coster.” I’ll cut her some slack because she still has a lovely enough face, but she’s pretty damn chubby here. Seeing her square ass spilling out her of her daisy dukes and her stomach rolls during the “love” scenes may be distracting to more modern audiences weaned on Skinemax soft-core. Rounding out the quartet is Mabel, played by Mabel Escaño, amusingly the only one brave enough to use her real name. She looks about 50 years old, is short, over tanned, even more “pleasantly plump” than Romay, wears way too much eye make-up and sports some ugly, fried orange hair. So there you have it; a virtual smorgasbord of flesh spanning about three decades. And all four spend the majority of their screen time completely naked. Knock yourself out.


So the girls show up at an oceanfront hotel in their skimpy tops and short shorts. It’s a huge place, but no one else is there and the bizarre-acting owner (played by Franco regular “Robert Foster”/Antonio Mayans) is obviously up to something. The girls pair off into two groups, go to their rooms and then reveal they’re kind-of, sort-of in secret lesbian relationships with one another but actually are hoping for some dick while on their vacation. Almost immediately, clothes are stripped off and the girls get down to business. There are two fairly graphic girl-girl scenes, both featuring Romay with each of the two younger women and both of which fall somewhere between late-night cable and hardcore porn. The girls talk some (the dialogue translations are monumentally stupid), walk around a lot and encounter some old pervert on the beach while sunbathing topless. One of the ladies goes for a walk and disappears. Then another.


Right down the road is an old monastery, which also happens to be home to an evil cult of undead hooded monks, some of whom get to wear skeleton masks while others have some terribly cheap make-up application that looks like globs of Vaseline on their faces. The leader of the cult has long dialogue scenes in close-up, says to a victim “Obey slut!” and explains that the curse of the zombie monks can only be broken when he falls in love. In the meantime, the monks gang rape women and then vag-stab them, and one of the girls is eventually possessed. There’s also a strange subplot involving the hotel owner and his “wife” Olivia (Eva León), a naked blonde kept chained up on bed, who is tortured, raped, threatened with poisoning and half starved to death. The scenes between these two are actually more interesting to watch than the main storyline.


It’s all pretty much a mess. Sometimes an amusing mess, but a mess nonetheless, and a slow-moving one at that. There are a few nicely composed/lit scenes here and there (especially ones taking place in the hotel hallway), too many sloppy zooms, zero gore and tons of full female nudity. Franco also wrote (apparently based on his own novel!!), edited, shot and scored this using various aliases.