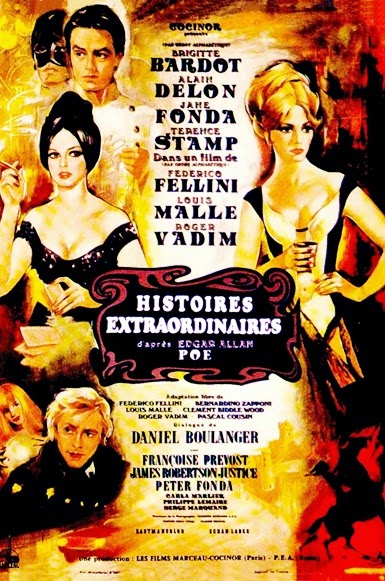 
Three top European directors take on the works of Edgar Allan Poe in this impressively mounted three-part horror anthology. Roger Vadim's "Metzengerstein" is incredibly beautiful. It was shot around great-looking, crumbling oceanfront castles and is remarkably photographed, costumed and scored. It's just a shame the core plotting is so weak and the segment is otherwise forgettable. The evil Baroness Frederique (a sometimes kinkily clad Jane Fonda, the director's wife at the time) is an insatiable tyrant who presides over orgies and sadistic, dehumanizing games. When she destroys a pure soul; her distant cousin Wilhelm (Peter Fonda), horses and fire play a key role in her demise. Though subtle, the romantic implications between the sibling actors is a bit discomforting at times. "William Wilson," by Louis Malle, is a well done, entertaining and underrated reworking of the old doppelganger theme starring Alain Delon as an arrogant lout and his better half, a exact copy who drives him crazy by putting a halt to his evil impulses. Odd story structure here and Brigitte Bardot (in a black wig) is good support during a fateful card game. And then comes the really great stuff...


"Toby Dammit" (released separately as "Never Bet the Devil Your Head"), a brilliant and sometimes supremely chilling piece of enigmatic filmmaking from Federico Fellini. Terence Stamp (not long after his award-winning performance in The Collector) is a marvel of facial expressions as boozy, obnoxious British movie star Toby Dammit, who falls apart at the seams upon arriving in Italy to start production on a Western reworking of the story of Christ. Instead he becomes imprisoned in his own personal hell. In every possible technical department, this segment is a triumph and the creepy finale (borrowing a key image from Mario Bava's Kill, Baby... Kill!) has lost absolutely none of its impact. The score by Nino Rota, art direction/ production design by Ghislain Uhry and Carlo Reva and cinematography by Giuseppe Rotunno all deserve special recognition in this segment.


The version I saw (entitled Tales of Mystery and Imagination) was a great-looking, subtitled print, though a dubbed version also exists featuring narration by Vincent Price.