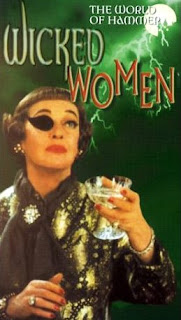 Directed by:
Robert Sidaway
Oliver Reed narrates this tiny collection of Hammer clips/trailers featuring some of the studio's most evil female characters. Included are Ingrid Pitt as COUNTESS DRACULA, Bette Davis as THE NANNY and in THE ANNIVERSARY, Tallulah Bankhead in FANATIC/DIE, DIE MY DARLING, Martine Beswick in DR. JEKYLL AND SISTER HYDE and a couple of others. What this really is is a single episode of the near-worthless The World of Hammer (1990) series. The entire 25-minute run time consists of nothing but clips (and not even the best clips), there are no interviews and the narration here isn't exactly trivia-packed or insightful, meaning this Anchor Bay tape is a rip-off. Back in 2000, AB released every episode in the 13-part series, each to an individual EP tape; each with a run-time of less than half-and-hour. The very least they could have done was squeeze four episodes onto three tapes instead of making one pay individually for each of them. Not that that would make the show any more worthwhile... The series itself sucks and is little more than a last opportunity to ring some quick cash out of the Hammer brand name. Don't bother.
Since the release of these tapes (which are to be avoided on amazon, ebay and other sites where they still sell them), Anchor Bay has re-released these episodes as simple bonus features attached to the "Hammer Collection" DVD series. WICKED WOMEN, for example, is an extra on their release of THE WITCHES (1966). I won't bother with reviewing the other tapes ("Christopher Lee," "Peter Cushing," "Lands Before Time," "Sci-Fi," "Vamp," etc.) in the series. This review will suffice for any of them.
★1/2
Posted by The Bloody Pit of Horror at 1:43 AM