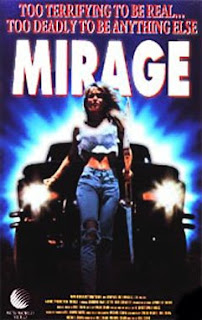 Directed by:
Bill Crain
One of the more obscure horror efforts of 1989, this low-budgeter plays like a mix of Beverly Hills 90210 (yuck), teen slasher flick and DUEL-inspired killer truck thriller, with roving camerawork that seems inspired by the MAD MAX films. Somewhere in the middle of the desert, some young adults are hanging out doing the usual. Well, if you count having sex in a the bed of a moving, driverless truck while some horrible rock singer screeches "I want to play with your poodle" as the "usual." With that stupid five-minute quickie behind them, blonde Chris (Jennifer McAllister) and her surfer dude look blonde boyfriend Greg (Kenneth Johnson, who speaks in an irritating Valley Dude accent) decide to shoot some arrows and frolic in the desert like two brainless beach party rejects in lurv. They're waiting on some friends to show up at their campsite for a little get-together. Trip (Kevin McParland), the mullet-headed "smart ass" of the group, who gets off on running over bunny rabbits, and Trip's shrill/bitchy girlfriend Mary (Nicole Anton) encounter a mysterious black pick-up truck with tinted windows. The truck chases after them, corners them and acts like it's going to crash into them before it disappears into thin air. Not overly concerned about the incident, Trip and Mary finally join their friends for some beers around a campfire.

Also showing up to complicate matters is Kyle (Todd Schaefer), who is Greg's brother and Chris's ex-boyfriend. Kyle wants to win back Chris, so he's brought along a bouncy bimbo named Bambi to make Chris jealous. Since Bambi is played by third-string Scream Queen Laura Albert (THE UNNAMABLE, DR. CALIGARI, etc.), the director makes sure he gets his money's worth by having Laura flash her breasts about half a dozen times during a tag football game. Afterward, Kyle gets Chris alone to lets her know how he feels and how he's changed, and the gang find a note left on their jeep's windshield that reads "You are all going to die." Hmmm...

After getting into a fight with Greg, Kyle takes off. Bambi goes home and Kyle decides to just ride his motorcycle around for a little bit. Back at the campfire, the black truck reappears and tries to run over Greg. Greg is convinced it's Kyle trying to get revenge. Before morning, both of the vehicles will be gone (their truck is even blown up with a grenade!), two of the them will be dead and the survivors must scurry across the desert as the mysterious black truck tries to track them down. The killer truck driver even likes to toy with his victims, leaving behind bloody body parts and threatening notes. There's some action, the long stretches of flat desert are fairly well used, the camerawork is good at times and there's a bit of gore (a neck is slashed, someone is run over, someone is shot through the face with an arrow, etc.) It's a long way off from DUEL, but it's not all terrible and there are some good scenes. Unfortunately, when the silly killer is finally revealed toward the end it's a big disappointment and any of the suspense and ambiguity built up during the film is all lost.
★★
Posted by The Bloody Pit of Horror at 4:30 PM