Frankenstein and the Monster from Hell (1974) 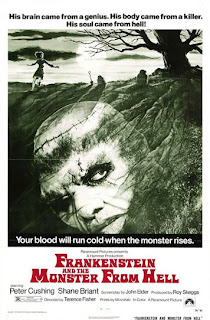 Doctor Carl Victor aka Baron Victor Frankenstein (Peter Cushing) is right where he should be - a psycho ward - only he's running it! Upon the arrival of a crazed young doctor (Shane Briant) who was busted purchasing corpses and will become his assistant, Victor is back in the lab experimenting with body parts to create a hairy, hulking flesh-munching ghoul (David Prowse, just a couple of year before playing Darth Vader in STAR WARS). Fisher's attention to atmosphere and Cushing's patented mad doctor (in a silly wig the actor thought made him look like Helen Hayes!) lay down a solid foundation, but Anthony Hinds’ stilted script (that he wrote under the alias “John Elder”), cheapo production values (nice miniatures!) and poor make-up FX (the monster looks like a combination of Big Foot and Cornelius from PLANET OF THE APES) pretty much kill its serious intentions. The storyline also really adds nothing of interest to the franchise. Still, this is an easy enough watch for British horror completists, as even a lesser Hammer production still has its moments.
.
Despite being unexceptional as a whole, the film is notable for a handful of different reasons. It was the last hurrah for both the Hammer Frankenstein series and prolific director Fisher (who passed away in 1980). It was also Cushing's last performance as the mad doctor. Finally, it was one of the most gruesome films ever put out by the studio. In fact, the film was initially released to American theaters (on a double billed with CAPTAIN KRONOS - VAMPIRE HUNTER) with six minutes removed. Unfortunately, the Paramount DVD release retains some of the these cuts, including a scene of a head being sawed open and the climactic sequence of the creature being torn to pieces by the inmates, as well as other minor snips.
.
The cast includes Madeline Smith as a sweet mute who also assists the doctor, former Dr. Who star Patrick Troughton (who also had a memorable appearance in THE OMEN), Bernard Lee (best known for playing M in the first eleven James Bond films) and Sydney Bromley.
.
★★
Posted by The Bloody Pit of Horror at 11:14 AM