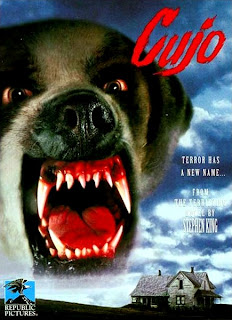 Directed by:
Lewis Teague
The ever-reliable Dee Wallace stars in this well-made, though highly unpleasant, adaptation of Stephen King's best-seller. On a sweltering summer day, young mother Donna and her little boy (Danny Pintauro) become trapped inside their broken-down car at a remote location while a large, rabid Saint Bernard dog prowls around outside. The dog is crazed thanks to a rabies infested bat bite, picks off anyone who happens to wander by and seems pretty damn smart, too (it hardly ever even turns its back on the car). After several days, and as heat exhaustion and death loom, Donna must find a way to get herself and her weakened son to safety before it's too late. Even though this sets itself up like a heavy-handed morality tale, with much of the first half spent establishing that Wallace's character is a married woman involved in an affair, this does a good job building suspense and terror in its concluding scenes. A high level of tension is reached by exploiting the claustrophobic confines of the car, the crying kid, the heat, the increasingly dirtier, bloodier dog and several botched escape attempts gone horribly wrong. A few of the attack scenes are brutal and there are at least two great jump-out-of-your seat moments. It's not exactly a "fun" film to watch (Roger Ebert slapped his lowest possible rating on it), but it's well done for what it is.
.
The dog effects are a seemless blend of real and mechanical dogs and are believable throughout. Jan de Bont's cinematography, including an inspired 360 degree spin inside the car, and Neil Travis' editing are both top notch. The cast includes Daniel Hugh-Kelly as the husband, Christopher Stone (the future Mr. Dee Wallace) as the "other man," Ed Lauter, Billy Jacoby and Robert Behling (from the extremely trashy Greek shocker ISLAND OF DEATH).
★★1/2
Posted by The Bloody Pit of Horror at 1:02 AM