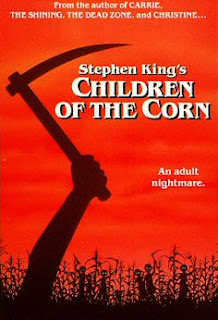 ...aka: Stephen King's Children of the Corn

Based on the Stephen King short story "Disciples of the Crow," this was called "An adult nightmare" in the ads, but the Jonathan Elias score and the video box are the only scary things about it. Still, it managed to strike a chord with a lot of people and became a big hit. I'm sure I'm not alone in saying that this movie scared the shit out of me when I was a little kid. Unfortunately, a revisit to the cornfields for this viewer proved to be an eye-opening experience. Oh, those nostalgic feelings... Those nostalgic, misleading feelings that fade into oblivion once one reaches adulthood... In the opening sequence (where this film obviously hits its peaks), a diner full of people are stabbed, poisoned and have their throats slashed by a mob of children and teenagers. One guy even gets his hand rammed through a meat grinder. Three years later, a young and somewhat stupid married couple (Linda Hamilton, right before hitting it big with THE TERMINATOR, and Peter Horton) are traveling through the southwest and end up stranded in the same, now deserted town of Gatlin, Nebraska after they run over a kid (who was already dead). A group of Satanist children (with biblical names) soon come strolling out from beneath the corn stalks and attempt to sacrifice them to "He Who Walks Behind The Rows," a demon who lives under the ground.
.
The premise is, for lack of a better word, corny, the lead characters behave like morons and the dialogue is frequently laughable, although some younger children might still find it scary enough (hey, I did!) and John Franklin (as Isaac) and Courtney Gains (as Malachi) are fairly effective in their roles. Also in the cast are R.G. Armstrong in a small supporting role, John Philbin and an uncredited Eric Freeman, who'd go on to bad movie infamany playing the Santa Claus killer's brother in SILENT NIGHT, DEADLY NIGHT, PART 2.
.
The same King story had previously been filmed by director John Woodward as DISCIPLES OF THE CROW (1983), which had a more compact run-time of 30 minutes and was once availble on the compilation video STEPHEN KING'S NIGHT SHIFT COLLECTION. Eight years later, Dimension purchased the rights to the story and yacked up the gory belated sequel CHILDREN OF THE CORN II: THE FINAL SACRIFICE (1992), which turned out to be anything but "final" since five additional direct-to-video sequels were within the next ten years. CHILDREN OF THE CORN III: URBAN HARVEST (1994) relocated the action to Chicago, CHILDREN OF THE CORN IV: THE GATHERING (1996) was a surprisingly decent rural revenge story (the best of the series if you ask me) and CHILDREN OF THE CORN V: FIELDS OF TERROR (1998) was a moronic teen slasher film. There was also CHILDREN OF THE CORN 666: ISAAC'S RETURN (1999), which has Franklin reprising his role, and CHILDREN OF THE CORN VII: REVELATION (2007), neither of which I've seen. If that isn't enough, a made-for-TV remake is in the works and slated for a 2009 release. Will it ever end?
★1/2
Posted by The Bloody Pit of Horror at 2:27 AM

well, i only saw it about two weeks ago (along with HELLRAISER: BLOODLINE, and THE WRAITH, during one of those desperate "i've seen everything else" phases). kids projecting authority/menace is a tough thing to pull off, and they don't, IMO. there's also way too much screenwriter's convenience here. he & she find a little girl by herself in a deserted town in the middle of nowhere, and neither makes much of an effort to question her about what's going on. the guy insists the spooky ghost-town is safe (!?) before wandering off so's linda hamilton's character can be accosted minutes later. it's boring.