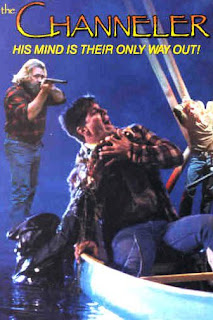 Directed by:
Grant Austin Waldman
After a promising opening, this doesn't take long to become a waste of time. A teacher (Jay Richardson), his girlfriend (Robin Sims) and a pack of male and female college students camp out near an abandoned mine they plan on cleaning up. A supernatural force ("channeled" through one of the others) creates murderous ghouls who attack and kill them all off. The creatures ("Darklings") are terrible, floppy-handed creations and the movie gets ultra sloppy at around the midway point as it heads toward an utterly senseless conclusion. One gets the impression the filmmakers ran out of time and/or money. There's a shower scene (doubled by adult film actress Sherri Graham) and not really enough gore for this type of film. Richardson, who is usually stuck playing either sleazebags or comic relief in seedier fair, has a rare (for him) role as a normal Joe. Dan Haggery and Richard Harrison are the big "names" in a cast that also includes Charles Solomon (from the WITCHCRAFT sequels), Oliver Darrow, David Homb, Brenda "Klemme"/James (who recently had a memorable role in SLITHER) and SURF NAZIS MUSST DIE star Tom Shell. The director also scripted and produced for this Magnum straight-to-video release. Fred Olen Ray gets a credit for "executive consultant."
Score: 3 out of 10
Posted by The Bloody Pit of Horror at 12:36 AM