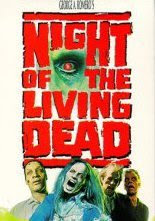 Directed by:
Tom Savini
Don't expect this remake to do justice to the 1968 original (it doesn't even come close) and you won't be too disappointed with what you see here. After the famous "They're coming to get you Barbara" line is annoyingly wasted as a blank screen voice over at the opening, the clever graveyard sequence that follows will provide a great jolt for those familiar with the original film. After Johnnie (Bill Moseley) gets his head bashed into a tombstone, Barbara (red-headed stunt woman Patricia Tallman) flees to a secluded farmhouse where Ben (pre-CANDYMAN Tony Todd, who is very good here) and the other five principals (Tom Towles, William Butler and three unknown actresses) turn up to fight for their lives... and fight with each other. Zombies are still all over the place and they've naturally been 'improved' through elaborate contemporary makeup designs, but the only two other major differences here (other than the fact it's in color) are... 1.) Instead of losing her mind, Barbara is a tough, take charge Sigourney Weaver-type. Though fairly well played by Tallman, this is such a predictable way to "update" a central female character in today's age it's almost groan-worthy at times... and... 2.) Romero's ironic ending, you know the incredibly downbeat one that shocked the hell out of audiences during its day, has been changed. To be perfectly honest, I have no clue why they scrapped it and replaced it with been-there-done-that redneck posse 'day after' scenes as well as one of the silliest 'eye for an eye' style twists I've seen in awhile, but they did. In my opinion the new ending stinks, though I know others who seem to like it.

Violent acts are more elaborate when the zombies are killed than in the original, but gore is toned down for the human deaths in an interesting contrast. Unfortunately this technique also helps to lessen some of the more frightening material. For instance, the supremely eerie cellar death of Mrs. Cooper in the original has been replaced by a scene that's best described as supremely lame. The zombie make-up designs and overall effects are excellent, it's well photographed and edited and most of the cast acquits itself well enough, though I got highly annoyed by Judy's non-stop screeching every time a floorboard creaked and Towles (HENRY) seemed to be playing the asshole Harry character for high camp value. It's nowhere near as scary, atmospheric, inventive or intelligent as the first, but taken on its own terms its slightly above average as far as zombie films are concerned. Bill Cardille (whose daughter Lori starred in Romero's DAY OF THE DEAD in 1985) has a cameo on a TV set, as does Russell Streiner, who pops up briefly as a sheriff. George A. Romero scripted and was one of the executive producers.
★★
Posted by The Bloody Pit of Horror at 3:39 AM