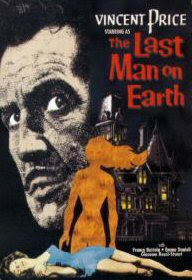 Based on the excellent novel "I Am Legend" by Richard Matheson (who also co-scripted using the alias "Logan Swanson"), this is an innovative and interesting, yet highly flawed, post-apocalyptic tale that would obviously go on to influence just about every end of the world zombie epic produced after. In fact, you can see Romero's entire 'Dead Trilogy' distinctly echoed within the first 20 minutes alone; an opening collage of a vacant city capped off with a "The End is Near" sign in front of a church (one of the first scenes in DAY OF THE DEAD featured a collage of an vacant city capped off with the newspaper headline "The Dead Walk"), one of the last surviving humans doing some shopping in an abandoned grocery store (DAWN OF THE DEAD) and even the undead congregating outside the home of a boarded-up home trying to bust their way inside (NIGHT OF THE LIVING DEAD). Vincent Price (taking a break from Corman's Poe series) stars as the title character, scientist Robert Morgan. Living alone in a quiet home in a quiet daytime world where he appears the be the last surviving human on the planet, Morgan spends his nights drinking and reflecting on the wife and daughter he lost some time ago and spends his days in preparation. There seems to be a million things to do with someone who should have plenty of free time on their hands. He has to have gasoline to run the generator. You see, light is very important in the new world. He has to clean up corpses littering the streets and dispose of them in a huge fire pit to keep germs and disease levels down. He has to go to the store for supplies; especially important seems to be fresh garlic to hang over the doorway. Mirrors to reflect light are also crucial. Lots of mirrors. And what's a man in a post-apocalyptic world without freshly sharpened stakes?

While Morgan may be the last human on the planet, he's not actually alone. A horde of undead vampire- zombies who only come out at night looking for fresh blood are also around. Morgan tries his best to keep the population down by going out in the daytime to stake the ones he can find, but it seems a never ending task. Long flashbacks show how the disease rapidly spread in the first place, with Morgan rushing to find a cure and being opposed by his colleague Ben Cortman (Giacomo Rossi-Stuart), who will later become the main ghoul knocking at Robert's door taunting "Morgan... come out. Come out!" Also in the flashbacks we see Morgan watch his little girl fall ill and die, and then his wife (Emma Danieli) suffering a similar fate, only to return from the dead as one of them. Another woman (Franca Bettoia) eventually shows up with knowledge of a temporary cure for the epidemic. And the echoes of NIGHT OF THE LIVING DEAD continue (a grim TV broadcast, using a radio to try to find other living humans, an armed posse eventually showing up for a grim finale...)

Despite this film's vast influence, it's far from perfect. After a terrific opening twenty minute depiction of life on a ravaged planet, complete with grim, memorable imagery and a poignant and interesting internal monologue delivered by Price, things rapidly go downhill in the middle portion of the film. It become languid in its pacing, uncertain in its tone and gets redundant in its content (the flashbacks actually add very little to the overall film other than padding). The vampire-zombies, as depicted here, aren't terrifying and don't seem to pose much of a threat to the lead character, who frequently just turns his back to them and stands there while they do nothing. I'm not really bothered too much by the bad dubbing on the Italian supporting cast, but some of the dialogue is downright silly. The ending is a little abrupt, also, and when you think about the ultimate actions of another surviving sect of humans, they make very little sense. So even though THE LAST MAN ON EARTH has its place in horror film history, I can only give it a mild recommendation as a lesser precursor to the superior Romero series of films and other zombie/post apocalyptic tales. If you've read Matheson's book, you may be more like me and walk away from this a bit disappointed in the long run. Not a bad film, but not the classic I was hoping for, either. Also with Umberto Raho.

The DVD (which pairs it with PANIC IN YEAR ZERO, another notable 60s post apocalyptic tale) comes with a brief interview with Matheson. He talks about how Hammer Studios were originally supposed to do the movie but ultimately couldn't because of UK censorship laws at the time. He also says he wanted his name off the credits because he was unhappy with the finished product (apparently his script had been rewritten, so he decided to use an alias). His novel would later be filmed two more times with much higher budgets as THE OMEGA MAN (1971; starring Charlton Heston) and then again as I AM LEGEND (2007; starring Will Smith).