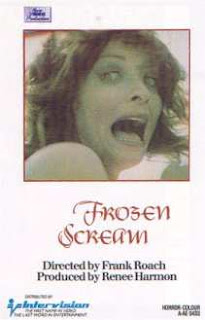 Directed by:
Frank Roach
After opening narration with keen insight into the mysteries of life ("Immortality? Why would anyone want to live forever in a world like this?"), mad Dr. Sven Johnson (Lee James) and his evil assistant Lil Stanhope (Renee Harmon) are shown trying to reverse the aging process by experimenting on tied-up captives. They send out ridiculous-looking, hooded, laughing, bug-eyed zombie henchmen with scythes to gather victims. Jumbled nightmare/flashbacks featuring wrist slashing, blood-drinking, a topless blonde who smashes her arms against her bare chest most of the time so you can't really see anything and zombified teens chanting "love and immortality!" around a campfire will make you think you're losing your mind. Meanwhile, a band at a pool party sings "Jack Around the Shack" (?!) to the tune of Rock Around the Clock! Nothing in this very bad (but rare) movie makes a lick of sense, the droning narration goes on and on (if fact it often goes right over some of the dialogue!) and the entire monotone cast acts brain dead. Harmon, who has an odd Eastern European (Swedish?) accent I can't quite place, also co-wrote the original story and produced, proving she is just as awful behind the scenes as she is onscreen.
Back in the early 1980s, Continental Video released FROZEN SCREAM on a double tape with the equally awful EXECUTIONER, PART II, which was also written by and starred Miss Harmon. She was also in HELLRIDERS (1984), LADY STREET FIGHTER (1985) and NIGHT OF TERROR (1986). I dare you to watch two of her films in one night!
NO STARS!
Posted by The Bloody Pit of Horror at 9:55 PM