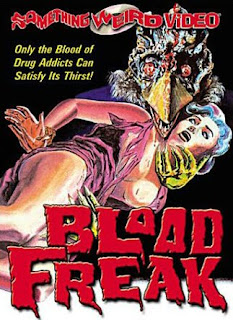 
A very shaky camera follows leather-clad 'Nam vet Herschell (Steve Hawkes) down the Florida turnpike, where he helps Angel, a stranded, bible quoting "seeker of the truth" in hot pants. The two go back to her place, where a hippie drug party hosted by Angel's cute, baby-voiced "far out" sister Anne is taking place. When Herschell ignores the advances of a woman, she informs him, "You're nothing but a dumb bastard who doesn't know where it's at, anyway!" Herschell ends up getting a job at the father's turkey farm, Anne gets him "hooked" on pot (illustrated by hilariously exaggerated Reefer Madness-style deep, wide-eyed drags) and scientists in lab jackets (who can't help but look at the camera immediately after reciting their ludicrous dialogue) trick him into eating chemicals that transform him into a turkey headed monster that gobbles, hangs people upside down, slits their throats and drinks the blood, all while dressed in flared bell-bottom pants! Oh Yeah! Camp Heaven! The best murder scene is a standout guy-getting-leg-cut-off-with-table-saw attack. Some real turkeys are beheaded, too, for additional gore. But the action stops cold when the on-screen, chain-smoking narrator (played by director Brad F. Grinter) reads preachy, Christian commentary off of cue cards on a desk in between loud coughing fits.


The big, muscular Hawkes (who starred in a couple of quickie Spanish-language Tarzan rip-offs as well) sports Elvis hair, thick sideburns and weird, blotchy skin (from what I've rear he was burnt up pretty badly at some point), and is one of the worst actors I can think of. Other cast members flub or forget their lines and often look directly at the camera and laugh! No one is credited with writing it on the version I have (the original VHS copy), but with lines directed toward Hawkes like, "He's strong, he's handsome and he enjoys being attractive to the opposite sex," I suspect he had his hand in there somewhere. Amazingly, this was originally given an X-rating in America.

The Something Weird DVD release is digitally remastered and super-stacked with goodies, including a gaggle of gory trailers and, best of all, two 'short subjects' featuring the two stars further embarrassing themselves. In The Walls Have Eyes (1969; self-described as 'skin noir') Hawkes and his drugged-out girlfriend 'Jody Baby' rendezvous at a scuzzy hole-in-the-wall only to fall prey to the perverted motel manager. And Grinter (who passed away in 1993) explains the virtues of his free-hangin' Florida nudist colony lifestyle in Brad Grinter, Nudist! Do NOT miss this movie.