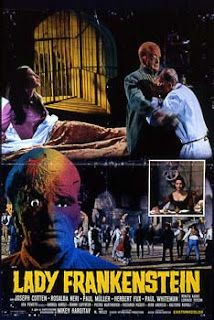 The Frankenstein saga gets an Italian sleaze upgrade in this fun and highly amusing sleaze epic that’s nowhere near as bad as it’s reputed to be. Top-billed Joseph Cotten doesn't have a whole lot of screen time (only about twenty minutes or so) as weary Baron Frankenstein, but that's OK, his beautiful daughter Tania (“Sara Bay”/Rosalba Neri) has just returned from med school eager to contribute to her father’s experiments. After his first lightning-born creation (played by Paul Whiteman) backfires in a big way - killing him and then escaping the castle to kill some grave-robbers and a few random naked women - Tania decides to redeem the family name (and make sure she is kept sexually satisfied at the same time!) by transferring the brain of her obedient, older doctor lover (Paul Muller) into the virile body of a hulking half-wit. Sure, it's low-aiming exploitation for the most part, but it’s still genuinely fun, the production values are not too bad (there are decent sets, locales and costumes, plus a very good dramatic music score) and Neri is great; an engaging, vicious, demanding, sexy femme fatale who is sick of everyone treating her like a little girl, gleefully attends a public hanging and uses both her brain and her body to manipulate everyone around her to get what she wants. Just as good in a more low-key kind of way is Muller, who manages to be sympathetic amid all the sleaze and puts his heart into a role that really deserves much less.