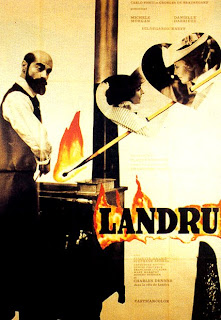 Directed by:
Claude Chabrol
Less exploitative and more accurate than other versions of the same tale, this is the true story of French madman Henri-Desiré Landru (played here by Charles Denner), who seduced and murdered 11 women in France for their money, leading to his capture and beheading. Released theatrically in the U.S. as BLUEBEARD, it's a difficult movie to find these days on home video, even though a subtitled and dubbed VHS were released. Michèle Morgan, Danielle Darrieux, Hildegard Knef, Henri Attal, Juliette Mayniel (EYES WITHOUT A FACE), Stéphane Audran and Catherine Rouvel co-star. Originally titled LANDRU.
Score: Haven't seen it.
Posted by The Bloody Pit of Horror at 6:16 AM