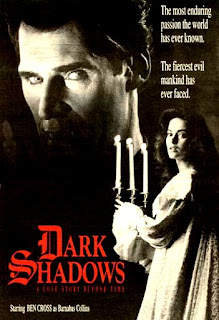 Directed by:
Dan Curtis
Dan Curtis created the original, videotaped TV horror soap opera Dark Shadows, which was so popular it lasted from 1966 to 1971 and spawned two theatrical releases: HOUSE OF DARK SHADOWS (1970; which was a hit) and NIGHT OF DARK SHADOWS (1971; which was heavily butchered and re-cut before release and was not a hit). I loathe soap operas and will never understand the appeal of that boring, dull, badly-acted and extremely cheap-looking series. Twenty years after that original series faded into oblivion (where it can stay) came a night-time made-for-TV remodeling of the same theme and characters, but with much better acting, photography and writing. It started with an interesting, handsomely-produced pilot episode, but unfortunately, the new and improved Dark Shadows did not catch on at all. I remember when I was a kid I was just starting to get into it before it was suddenly pulled off the air. The excellent regular season cast included a perfectly cast Ben Cross as vampire Barnabas Collins, as well as Barbara Steele (making a rare 90s appearance) as Dr. Julia Hoffman, a doctor trying to find a cure for vampirism, Jean Simmons, Joanna Going, Roy Thinnes, Lysette Anthony, Stefan Gierasch, Julianna McCarthy, Hope North, Ely Pouget and Michael T. Weiss.

Curtis and Steele had a long-running working relationship which previously resulted in the Emmy winning, made-for-TV mini-series THE WINDS OF WAR (1983) and its sequel WAR AND REMEMBRANCE (1988), which were the most expensive TV movies ever made. MPI released every episode of both the original and newer series to home video. Steele also produced the TV presentation DARK SHADOWS: 30TH ANNIVERSARY TRIBUTE (1996), which is also on video.
Score: n/a
Posted by The Bloody Pit of Horror at 1:39 AM