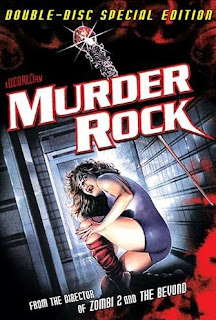 
Who knew Fulci could be so glossy? Most of his films from the early 80s are pretty gritty. From his tropical living dead cash-in ZOMBI 2 (1979) to the misogynistic exploits of the THE NEW YORK RIPPER (1982), it's all about primitive shock effects shot through a grainy eye. Not so much here. This one's sumptuous, soft-focus and much more polished. It's also quite restrained as far as blood-and-guts are concerned and is one of the director's least violent and least graphic films. Trading off over-the-top splatter for a more professional-looking effort is something that's probably not going to sit well with the majority of Mr. Fulci's fan base. After all, we're talking about a man whose claim to fame rests primarily on images of eyeballs being skewered by splintered wood, internal organs exiting bodies through mouths, razor blades slicing open nipples and ginger girls getting their heads blasted off with shotguns. Murderock is the other side of Fulci. It's him returning to the oft-neglected beginning of his career when he was making less-celebrated giallo thrillers such as A Lizard in a Woman's Skin (1971) and DON'T TORTURE A DUCKLING (1972). Is it as good as either of those? Nope, but it's a passable effort. Passable if you have a high tolerance for 80s tackiness, that is.

The words "cheesy" and "dated" often crop up during discussions of this film and both are apt descriptions of what you'll see here. Fulci claimed in interviews that both the musical numbers and Keith Emerson's cheesy pop/disco/synth music soundtrack were both forced upon him by the film's producer. This results in what is essentially a slasher remake of Flashdance. Sure it sounds God awful, and parts of it are indeed God awful, but it's usually in a good-dumb-fun kind of way. Much of the entertainment value rests in the hilarious choreographed dance routines where leotard-clad ladies get so worked up they're flinging sweat off by the time they're done. And then, of course, they die.

The very attractive Olga Karlatos (aka the gouged-out eyeball chica in Zombi 2) stars as Candice Norman, a troubled dance instructor whipping her young male and female dancers into shape at the Arts for Living Center in New York City. One of her female students decides to stay late and is attacked while taking a shower by a psycho who chloroforms her and then sticks a thin metal pin through her heart. Many more students will die in a similar fashion and everything seems to coincide with the arrival of some producers announcing they'll be accepting only a couple of the students from the school for an upcoming TV series. Is someone wanting to trim the competition to increase their own chances? Or is something else afoot?

You get your typical line-up of suspects. Naturally, any of the students would have reason to kill the others. The first victim's boyfriend, Willy (Christian Borromeo), seems to have a temper and a bad habit of being at the scene of several of the murders before they occurred. Then there's jealous choreographer Margie (Geretta Giancarlo), academy director Dick Gibson (Claudio Cassinelli), who either is sleeping with several of the students or wants to, and Candice herself, who has been plagued by strange nightmares of a man trying to kill her. Even stranger, the man she's been dreaming about turns out to be a real man named George Webb (Ray Lovelock), a hard-drinking, washed up former male model. Candice and George begin seeing one another, but George himself turns out to be connected to the dance academy. One of the chief dancers is his ex-girlfriend. Everything ends with a John Huston quote.

Nice-looking production with a typically convoluted plot and badly written dialogue, a pinch of T&A, a surprisingly low violence quotient and a fair mystery. Karlatos does a very good job with what's handed to her, though the rest of the cast doesn't make much of an impression. Cosimo Cinieri (from Fulci's Manhattan Baby) co-stars as a detective and small roles are played by Robert Gligorov (from Soavi's STAGE FRIGHT) and an uncredited Al Cliver. Fulci himself appears briefly as an agent.

This is one of the few Fulci horror films I have yet to see. I tend to like Fulci when he does supernatural, because he consciously dispenses with narrative logic. I even liked Sodoma's Ghosts. I didn't like Don't Torture a Duckling, however. So I've been leaving his gialli for last. Mixing giallo with Flashdance sounds tempting, though. Thanks for the review.

I think this one depends solely on one's appreciation for cheesy dance or musical sequences, which I find entertaining for some reason. The writing - like many of the gialli I've seen - is rubbish. I think Don't Torture a Duckling is one of Fulci's better written and thought-out films, though many find it downright boring. *shrug*

Just about everyone other than me finds Sodoma's Ghosts downright boring. I think even Fulci found it downright boring. So I'm not easily bored. I didn't find Duckling boring; just overdramatized. I dunno. I'd probably like it more if I saw it again. But I look forward to cheesy dance in my horror movies. Fulci does Incredibly Strange Creatures: sounds too good to be true.