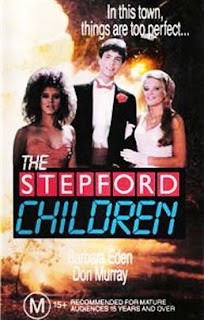 Directed by:
Alan J. Levi
The third in the series, following the theatrical hit THE STEPFORD WIVES (1975) and the forgettable made-for-TV effort REVENGE OF THE STEPFORD WIVES (1980), is a silly and somewhat dull (though watchable) telefilm from the director of the Frankie Avalon "horror" BLOOD SONG (1982) and countless TV movies. Two big city teens (Tammy Lauren, Randall Batinkoff) move with their parents (Barbara Eden, Don Murray) to a small town where the sinister adults have perfected making robotic "model" teenagers who do exactly as they are told. With Ken Swofford (BLACK ROSES), Sharon Spelman (THE BLOB remake), former pro football linebacker and sports commentator Dick Butkus, Richard Anderson (THE NIGHT STRANGLER), James Coco (a bright spot as a cooking teacher), a young John Cameron Mitchell and Judith Baldwin (who had appeared in the original film). At least this one never polluted our video shelves here in America since it was never released on tape (and has yet to receive a DVD release either). It was followed by yet another TV "sequel" in 1995 (which was made for cable) called THE STEPFORD HUSBANDS and then Frank Oz's 2004 abomination starring Nicole Kidman. The original is the only one of these that's really worth watching.
★★
Posted by The Bloody Pit of Horror at 11:04 PM

Email ThisBlogThis!Share to TwitterShare to FacebookShare to Pinterest
Labels: made-for-TV