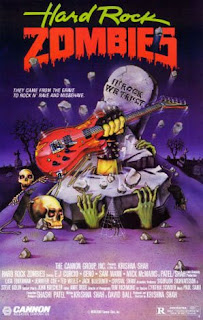 
Would-be cult flick finds four members of a heavy metal hair band descending on a small town and disrupting the peaceful lives of the old-fashioned citizens. They end up getting themselves murdered and (thanks to an incantation one of the band members recorded before dying) come back as zombies to get revenge on the Neo Nazi baddies responsible. There's a werewolf creature, an evil blonde seductress who gets naked, a dwarf, Hitler and frequent breaks made for musical numbers. The makeup effects are laughable, the acting is terrible and it could (and should) have been funnier, but the climactic cheesy love song ("Cassie") belted out to a shy, young, seemingly mute, wide-eyed groupie has to be some sort of stupid classic. American Drive-In (1985), by the same director featured this movie as the main attraction.