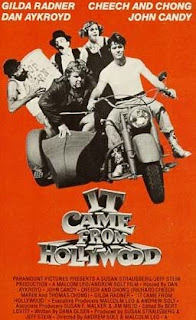 Directed by:
Malcolm Leo
Andrew Solt
And it can go right back to Hollywood, dig a hole, jump in and bury itself. When reviewing compilation movies put together simply to showcase clips from other movies, there are just two areas that are really important. The first are the clips themselves. Is there a consistent theme? Did they select good ones? Do the clips play into an overall theme? Second, and most important of all, is the quality of the original footage shot to bookend all the clips. Are those scenes funny? Insightful? Informative? Well written? While ITFH does feature plenty of amusing clips from vintage horror and science fiction films (as well as juvenile delinquent films, drug pictures, musicals and other genres), overall it's a complete failure. The one area the film does do right is categorizing the clips. It's broken down into ten sections - "Gorillas," "Musical Memories" and "Monsters" are hosted by Gilda Radner, "Aliens," "The Brain" and "Troubled Teens" are hosted by Dan Ackroyd, "A Tribute to Ed Wood" and "Technical Triumphs" are hosted by John Candy and "Giants/Tiny People" and (surprise, surprise) "Getting High" are hosted by Cheech Marin and Tommy Chong.
.
So what went wrong? For starters, in a film supposedly celebrating awful Grade Z movies, is it really a wise idea to include clips from classic films like THE DAY THE EARTH STOOD STILL (1951), THE WAR OF THE WORLDS (1953), CREATURE FROM THE BLACK LAGOON (1954), THE INCREDIBLE SHRINKING MAN (1957), THE FLY (1958) and HOUSE ON HAUNTED HILL (1959)? Yes, all of those films are "dated." But they're also landmark genre films that don't deserve to be pissed on simply because special effects technology has improved since they were made. And none of them deserve to be senselessly grouped together with notoriously awful bombs like ROBOT MONSTER (1953), THE CREEPING TERROR (1964) and MARS NEEDS WOMEN (1967).
.
The worst part of this production are the new "comic" vignettes; which are irritating, painfully unfunny and horribly written. Often times the narration looks down upon the featured movies with disdain and contempt; cynically mocking them while completely losing sight of the fact that the films they're making fun of are often charming and uniquely entertaining and that's why people enjoy watching them. There's little actual love for schlock/Z grade productions in this film. It's just a cheap opportunity for some usually-funny people to spit out a bunch of woefully written pun-laded one-liners that aren't the least bit funny. And as far as our famous comedian hosts go, all I can say is that you'd be half-tempting to start pelting them with tomatoes if they hadn't already proven their talents many times over elsewhere.
★
Posted by The Bloody Pit of Horror at 3:38 AM