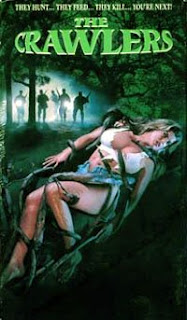 ...aka: Contamination.7
...aka: Creepers
...aka: Troll 3
...aka: Troll III: Contamination Point 7
Directed by:
Fabrizio Laurenti
Big city girl Josie (Mary Sellers) has just arrived back in her small Alaskan hometown for an extended stay with her mother and kid brother, and decides to try to reconcile with her former high school boyfriend Matt (Jason Saucier) while she's there. Down at the nearby nuclear power plant, illegal chemical dumping (part of an obligatory and half-assed cover-up subplot) has resulted in animated, super-intelligent, radioactive tree roots that are killing everyone off. Victims include an obnoxious sheriff, a female hitchhiker passing through town, a farmer and his wife, a hooker with a heart of gold and a gas station attendant and his pet dog Chester. The roots mostly just trip or strangle people and make a hilarious whip-cracking noise whenever they attack. They also make a (toy) helicopter explode by pulling it about two feet to the ground. During the film's one and only bloody scene, the roots go into a guy's mouth and then poke the eyeball out of a mannequin head. And that's about all she wrote with this dull-as-dishwater waste of time, which would be totally forgotten by now if not for a misleading title change linking it to the notoriously awful camp classic TROLL 2. So be forewarned, no trolls make an appearance in CONTAMINATION.7 (aka TROLL 3). Hell, there aren't even any goblins.

And unfortunately, while TROLL 2 failed in an enjoyably awful way, this one fails to reach that film's same level of redeeming unintentional hilarity. Though thoroughly inept, it's also boring, clichéd, slow-moving and far too tame to really be all that enjoyable in a junk movie way. The fact they used inexperienced local "talent" to fill out the cast, along with providing these laughably bad amateur thesps with truly rotten dialogue throughout the film, is the only point of possible enjoyment, though even that got old quickly.

Probably best known as THE CRAWLERS here in the States, though the version I viewed was titled CREEPERS. Don't know if that's a cut version of this film or not, but I highly doubt it. I'm also not sure of Joe D'Amato's actual involvement since his name (or "David Hills" for that matter) is nowhere to be found in the credits, but he's still listed as co-director on many sites. Only one director is listed in the version I viewed and that's "Martin Newlin;" the same alias used by Fabrizio Laurenti for the film WITCHERY (1988). The costumes were designed by none other than EMANUELLE star Laura Gemser and her husband Gabriele Tinti (who died in 1991) supposedly has a small role in the film as well, even though I don't recall seeing him anywhere.
NO STARS!
Posted by The Bloody Pit of Horror at 11:45 PM

the poster reminds me of the one for SUBSPECIES (1991).