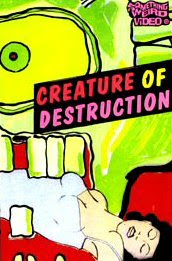 
At the upscale Tanglewood Beach Resort, a honeymooning couple is found viciously murdered in their room. Or more eloquently put by a copper on the case, "...their neck bones were mutilated to a pulp!" Couldn't have anything to do with the arrival of shady stage hypnotist John Basso (Les Tremayne) and his miserable blonde hottie assistant Doreena (Pat Delaney), could it? Nah! One thing's for sure, pot-bellied resort owner and all around greed-monger Sam Crane (Neil Fletcher) could care less as long as he's getting his piece of the pie. Seeing how popular Basso's act has become, he has decided to promote them and potentially make millions on the side. I mean, who really cares if every once in awhile a couple of necking teens get slaughtered as long as the dough's rolling in? Sam's bland daughter Lynn (Suzanne Roy) is conveniently dating studly "air force parapsychologist" (?) Ted (Aron Kincaid) and he seems to know all about things of the other-worldly nature. He also believes the sudden rash of murders and rubber-lizard-monster-with-ping-pong -ball-eyes-and-over-sized-plastic-fangs sightings may somehow involve the newly hired resort entertainment. And he is correct. It all has something to do with Doreena being the reincarnation of some 17th Century British woman and having a "physical link" to a sea monster. Or something. Lt. Blake (Roger Ready) and company are on the case.
.
This 16mm effort from Texas-based schlockmeister Larry Buchanan (a color remake of 1956's THE SHE CREATURE that was sold directly to TV by AIP) opens with a five minute pre-credit sequence that makes no sense whatsoever and doesn't really improve much from there. The film is not only bogged down by ultra-low production values (flat and too-dark cinematography, continuity errors galore, ragged edited, etc.), but is also far too slow-moving and talky to maintain much interest. Not only that, but there's precious little sea monster action in this one, the monster costume is completely laughable and the lame ass monster attack scenes all take place completely off screen. There's nothing really to recommend about this once, except for...
.
Two cheesy Beach Party-style musical/dance numbers that came out of nowhere and keep this from scoring an otherwise well-deserved 1. The lead singer is some surfer-looking guy named Scotty McKay, who sings several songs at a beach dance party. The second one is about Batman and pretty cool. The most hilarious moment however is when Scotty sits down on the beach to sing a depressing song about "lonely people" and then suddenly a bunch of smiling teens jump up and start vigorously dancing! Afterward poor Scotty drives off on his motorcycle and gets mauled to death by the creature and we never hear from him again. Sigh.
.
Horror fans should recognize Tremayne from one of his many horror/sci-fi outings (THE MONOLITH MONSTERS, THE SLIME PEOPLE, etc.) and may also know "Ann McAdams"/Annabelle Weenick (the sanitarium doctor from DON'T LOOK IN THE BASEMENT), who has a supporting role as Sam's wife. And of course "Beach Party" viewers will know Mr. Kincaid. Apparently he tried to sue AIP before finishing out his contract so they forced him in to star in this film.