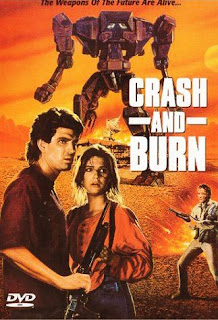 Directed by:
Charles Band
It's the year 2030 and various characters (a elderly station director, his granddaughter, a deliveryman, a teacher, a sleazy talk show host, a pair of female porno stars and a handyman) end up stranded at an isolated television station during a nuclear storm. Characters start turning up dead thanks to a faulty android, who is hidden amongst the group of otherwise normal humans. The futuristic Ten Little Indians-style storyline is aided by David Allen's excellent stop-motion special effects, which are effective but scantly used in this low-budget production. A giant robot, similar to the one from ROBOT JOX (1990) and its sequel ROBOT WARS (1993) - from the same team of filmmakers over at Full Moon - shows up at the very end and the screenplay pinches numerous ideas from a variety of popular sci-fi and horror movies, such as WESTWORLD and THE TERMINATOR. The cast (many of whom appeared in other Band productions) includes Megan Ward (in her debut film), Ralph Waite (from The Waltons), Paul Ganus, soap opera actress Eva La Rue, Jack McGee, Elizabeth Maclellan (PUPPET MASTER 2), Bill Moseley and John Davis Chandler.
★★
Posted by The Bloody Pit of Horror at 11:39 PM

Email ThisBlogThis!Share to TwitterShare to FacebookShare to Pinterest
Labels: robot