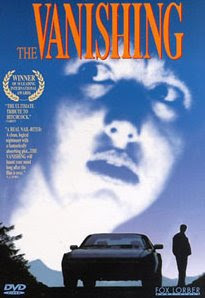 ...aka: Homme qui voulait savoir, L'
...aka: Vanishing, The
Directed by:
George Sluizer
Eerie, memorable and effectively understated chiller finds newlywed Dutch couple Rex (Gene Bervoets) and Saskia (Johanna Ter Steege) traveling through the scenic French countryside; when she runs in to use the restroom at a crowded gas station and disappears, an obsessive three-year odyssey begins for the husband to find out just what happened. So consumed in his need for an answer, his whole life is crumbling around him. The real killer turns out to be sociopath Raymond (Bernard-Pierre Donnadieu), a married, incredibly laid-back and fully functioning science teacher with two young daughters who is following the media campaign and quietly studying Rex himself. Out of the blue, Raymond shows up one day and offers Rex the opportunity to discover the fate of his long-missing wife... Tim Krabbé adapted his own novel The Golden Egg (with assist from the director/co-producer) for this critically acclaimed horror-thriller and art house success. Extremely well directed, with strong lead performances. Particularly good is Donnadieu, whose casual and cold, matter-of-face demeanor about who he is and what he does is downright chilling.
Originally titled SPOORLOOS (in French/Dutch with English subtitles on the DVD), it was needlessly and less effectively remade by the same director for 20th Century Fox in 1993 under the title THE VANISHING (also the U.S. release title of the original). For the remake, they brought in some name stars (Kiefer Sutherland, Jeff Bridges, Sandra Bullock, etc.), but it's nowhere near as effective.
★★★
Posted by The Bloody Pit of Horror at 8:37 AM