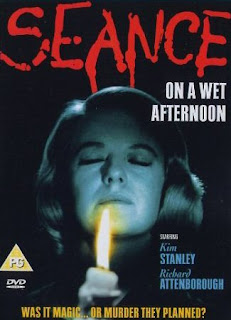 Directed by:
Bryan Forbes
Myra Savage (Kim Stanley) is a medium who shares a large, quiet, inherited Victorian home in gloomy, rain-soaked England with her unemployed, passive husband Bill (Richard Attenborough). In response to her own wasted existence and mental deterioration (possibly about losing her young son Arthur - but it's a little more complicated than that as we will later see), she hatches a scheme to have Bill abduct a wealthy child so that she can receive some notoriety by using her “abilities” to locate her. Bill heads out on her motorcycle and sidecar to a school, where he steals a car with a young schoolgirl (Judith Donner) in the back. He chloroforms her and takes her back to their home, to a special, windowless upstairs bedroom they’ve remolded to resemble a hospital room; always keeping the door locked, keeping tabs on her using a peephole and wearing masks over their faces to conceal their identities when interacting with the girl. Meanwhile, Bill sends out a letter to blackmail the girls’ parents for 25,000 and Myra makes contact with them; discovering the dad (Mark Eden) is highly skeptical of her psychic powers, but the mom (Nanette Newman) is slightly more open. Complications arise when the girl comes down with a bad fever and needs hospitalization, the police (led by the always great character actor and stage star Patrick Magee) start snooping around the house and Myra slips further into insanity.
.
Though extremely well written and directed, in many ways this bleak psychological drama is an "actor's movie;" a performance movie that will be most appreciated by people who enjoy watching two actors at the top of their craft. And Stanley and Attenborough are both superb; their interactions brilliantly played. Stanley as the seriously disturbed Myra is utterly believable, and ultimately sympathetic, because she simply refuses to overshoot the part at any point in the film. Whether communicating with her dead son, forgetting events that just took place or quaintly explaining her marriage away to her husband as “…because you’re weak and you need me,” it’s a performance of powerful, quiet desperation that you seldom see. Attenborough is equally good in the less-showy role; his glassy-eyed looks as he sits and listens to his wife ramble on, fully aware she’s completely deteriorated to the point of full-out delusions, is highly affecting and the perfect counterpoint. But Myra is right, the two somehow fit each other perfectly.

During her career, Stanley (who passed away in 2001) was a success on the stage and on Broadway, but would only appear in a handful of TV shows and even fewer feature films (no more than a half dozen). She refused to repeat most of her stage roles for the screen and had been quoted as saying "I was happy on stage... Hollywood was phony." Amazingly, what she did decide to immortalize on film garnered her across-the-board critical approval and awards; including two Emmy wins for her scant TV work. Her performance in Séance won her the top acting honor from both the National Board of Review and the New York Film Critics Circle, and an Academy Award nomination (almost unheard of for a small scale movie like Séance). Attenborough would win a BAFTA award for this movie (which he also co-produced) and would go on to a successful career as an actor, producer and director; he'd make the horror film MAGIC in 1978 and GANDHI in 1982; which netted him a pair of Oscars. He was knighted in 1976.
The story and visual presentation are also impressive for a low-budget British film and keep this from coming off as a ‘filmed stage play.” Director Forbes captures an oppressive, dreary feeling through simple touches like a face shot through a candle flame, ripples in puddles and drops of rain hitting the camera as it tilts up past the home to an overcast sky above.
★★★1/2
Posted by The Bloody Pit of Horror at 1:33 AM