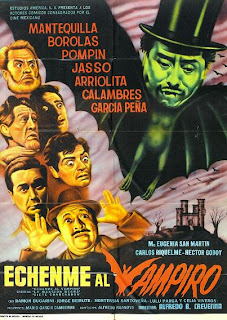 ...aka: Bring Me the Vampire

Directed by:
Alfredo B. Crevenna
Insanely wealthy businessman Henry McDermott (Carlos Riquelme) has just died under mysterious circumstances. In fact, a painting of him over the fireplace clearly shows a knife stuck in his stomach! Henry's son Harold (Héctor Godoy) is in charge of rounding up a series of potential heirs and getting them to stay in Henry's creepy old mansion, which has supposedly been built atop an ancient cemetery. The catch is that they have to stay there for an entire month to collect a million dollars apiece. Among those mentioned in the will are Harold's girlfriend Martha (María Eugenia San Martín), inventor Thomas Alva Madison ("Arriolita"/ Armando Arriola), budding actress Lulu (Lulú Parga), starving artist Oscar (Pascual García Peña), pickpocket Joe Benjamin (Pompín Iglesias), pianist Anastasio Superstein (José Jasso), wanna-be ladies man Aldos ("Borolas"/ Joaquín García Vargas) and singer and dancer Albert Lambert ("Calambres"/ Roberto Cobo), who performs a funny musical number called "Chicago Mambo" with a handkerchief in his back pocket. Too many central characters? Yep, and there's more. Throw in a stern housekeeper, a hypnotized maid named Amy (Celia Viveros), an inept police inspector named Bobby ("Mantequilla/ Fernando Soto), an attorney (Ramón Bugarini) and Henry's mentally imbalanced brother into the mix. Said characters basically run around the mansion for an hour and a half while being killed off one-by-one. A man is hung, another is drowned, a head is served on a platter, one guy disintigrates because of poison milk, etc. Each time someone dies, a note is left behind stating the inheritance has increased by a million dollars.
This is a 1930s-style b/w old dark house horror-comedy full of annoying overacting, bad physical comedy, lame sight gags, constant mugging, double takes, over-the-top hysterics and comic sound effects. Yes, we're talkin' kazoo and "Boi-i-ing!" here, folks. The cast boasts having eight comedians, but strangely what there is to steal here is stolen by two actors who have to play their roles mostly straight. The first is Yerye Beirut as Julius, Henry's brother, who fancies himself a vampire but is actually just insane and sleeps downstairs in a coffin. The second is Hortensia Santoveña, who's perfect as the Danvers-like witch/housekeeper Eloise. Henry's ghost plays frequent visits to the cast, there are some black-robed bad spirits running around, a talking skeleton, a mummy and a surprise ending. Elsa Cárdenas appears in one scene as a "decoy," and there are lots of "witty" lines such as "If we gotta die in order to get money, after your death instead of spending money you'd be spending bones!"
K. Gordon Murray brought this to America, had it horribly English-dubbed at his Coral Gables, Florida studio for TV and matinee showings (which changes the character names) and added a new title sequence featuring a drawing of a vampire standing on a hill looking at a stagecoach. The English-language version is credited to director "Manuel San Fernando," and it's very poorly done ("George McDermott" in the first scene becomes "Henry McDermott" from then on out; they keep saying there are "seven heirs" when there are clearly more, etc.). The sequel LA CASA DE LOS ESPANTOS (1963; aka HOUSE OF THE FRIGHTS) was never officially released in the United States.
★1/2
Posted by The Bloody Pit of Horror at 1:06 AM