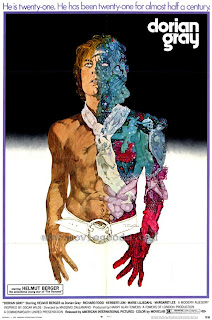 ...aka: Bildnis des Dorian Gray, Das
...aka: Dio chiamoto Dorian, Il
...aka: Evils of Dorian Gray, The
...aka: Portrait of Dorian Gray, The
...aka: Secret of Dorian Gray, The
Directed by:
Massimo Dallamano
Oscar Wilde's famous allegorical novel "The Picture of Dorian Gray," which was first published in 1890, was a key adapted literary piece of the silent film era. There were versions of it made in 1910, 1913, 1915 (one filmed in the US, the other in Russia), 1916, 1917 and 1918 (which featured a young Bela Lugosi). Of those, only the the 1916 version (directed by Fred W. Durrant and starring Henry Victor) remains. What most rightfully consider the definitive screen version of the tale came in 1945. Directed by Albert Lewin for MGM, it starred Hurd Hattfield as Dorian, featured scene-stealing work from George Sanders and Angela Lansbury and was gorgeously photographed by Harry Stradling Sr., who received a well-deserved Academy Award for his work. The tale then layed dormant for about twenty-five years until it was resurrected once again by producers Harry Alan Towers and Samuel Z. Arkoff, two pioneering forces in the exploitation business. They tapped Italian-born Massimo Dallamano (who'd go on to make the popular giallo WHAT HAVE THEY DONE TO SOLANGE? a year later) to direct and co-write the film, and brought along a cast of familiar faces for a version so over-the-top trashy that it was critically annihilated upon release.
Aesthetically speaking, Helmut Berger was an ideal casting choice as Dorian, the man who sells his soul for eternal youth and beauty. Blonde, blue-eyed Berger is about as non-threateningly pretty as any man can be, which is crucial here because his allure is supposed to captivate men and women alike. His Dorian begins as a naive, well-meaning sort who has simplistic views on everything but quickly becomes victim to his own ego. Herbert Lom, surprisingly great in his off-beat role, co-stars as Henry Wotton; here an intelligent, gay, wealthy, worldly art collecter who cleverly manipulates those around him to get exactly what he wants. He has his eye on Dorian; slowly and methodically chipping away at his flimsy, half-formed ideals about life and love, and ensuring Dorian's budding relationship with virginal young actress Sybil Vane (Marie Liljedahl) stops before it really has a chance to begin.
Henry scares Dorian with his comments about aging ("One day you'll be old, wrinkled and ugly... We degenerate into hideous puppets."), encourages Dorian to be sexually experimental, not tie himself down, accompany him to parties where he can hobnob with filthy rich swingers and use his good looks to get whatever he wants. Henry's comments have also prompted Dorian to swear away his soul for eternal youth by a portrait his painter friend Basil Hallward (Richard Todd) has just made of him. Sybil is hit and killed by a car and once Dorian is exposed to the new jetset lifestyle and its kinky players, he's hooked and things begin spiralling out of control. Just as in most of the other adaptations of the story, Dorian remains his youthful self throughout the years as his painting tells of his true age.
Some have brushed this off as a silly piece of soft-core Euro-porn and I'm not going to argue with that sentiment. However, I have to say that I quite enjoyed the amped-up sexual compotent of this film and the places the director goes. The set-ups for the skin scenes, which range from innocent and sexy to seedy and discomforting, are sometimes so gloriously campy that you can't help but laugh. During one scene, Berger bends a wealthy old bat (Isa Miranda) over in a stable and has anal sex with her right next to a horse! 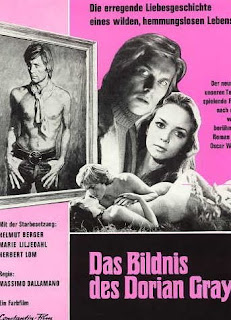 My favorite bit though has to be when Berger (immediately after having sex with two different women) hops in the shower, drops the soap and a hand is shown grabbing it off the floor, only to reveal it's a heavily rouged/ mascara-wearing Lom using the opportunity to hop into the shower with him! And yes, Dorian does reciprocate.
One of Dorian's other lovers is Henry's equally predatory sister Gwendolyn (Maragaret Lee), who is bisexual and likes to be smacked around with a belt. Dorian also becomes an adult film star (!), has sex with a muscular black dude in a public toilet and attends a candlelit orgy at "The House of Pleasure," among other things. There's a cabaret musical number with a drag queen stripper, a nightclub called "The Black Cock" and sex scenes on a theater stage, in a field, on a yacht and on a beach. The porno director who Dorian works for is, interestingly enough, played by a black actress (Beryl Cunningham). While there is plenty of nudity, some of the sex is done subtlely or implied, and many of the scenes are strangely obscured when the camera dips behind tree branches, potted plants and curtains. The slapdash sexuality in this movie was unexpected (certainly pretty risque for the time) and actually kind of wonderful.
Visually, there are some very nice touches here. The film opens with an intriguing shot of bloody hands stretched out in front of the camera as it travels down stairs up to a kitchen sink followed by another elaborate camera shot tracking through a house with swank 70s decor. Dallamano also seems to have a way of making certain colors literally jump out of the screen at you, such as when Dorian takes his very red car on a drive through the lush green countryside. The settings are nice, the costuming is really interesting and they even throw in several disco scenes for us to snicker at.
Co-stars include Renato Romano as Dorian's former college friend, Maria Rohm (who is pitifully wasted here) as his wife, Eleonora Rossi Drago as a swinger and Stewart Black as Sybil's over-protective brother, who likely has incestuous designs on her and blames Dorian for her death. Liljedahl also gets to return after her death playing a woman named Gladys, who's a dead ringer for Sybil. It was filmed in London with Italian and West German backing. A cut VHS version was released here in America through Republic Pictures, but there's no official DVD for this one. The version I saw ran 98 minutes and uses the alt. title THE SECRET OF DORIAN GRAY (though it was packaged as the title I have listed here).
"Today, beauty is more important than genius." Indeed.
★★1/2
Posted by The Bloody Pit of Horror at 11:13 PM