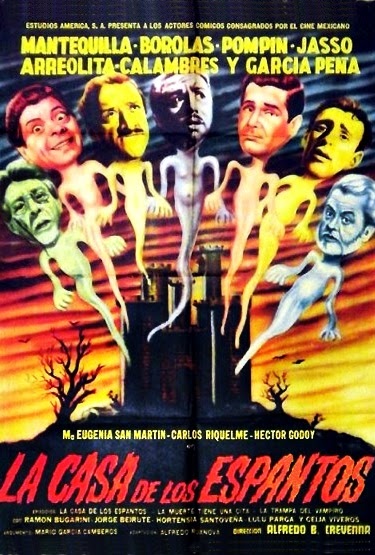 
At the end of BRING ME THE VAMPIRE (1963), all of the haunted house shenanigans turned out to be a hoax as the "dead" man - Marcos Méndez aka Henry McDermott in the first dubbed film (Carlos Riquelme) - only wanted his "heirs" to perfect their talents before deciding to finance their careers. In this immediate follow-up (filmed the same year), everyone from the first movie - the kooky inventor, the painter, the thief, the budding actress, the dancer, etc. - are called back to the creepy mansion home for a revision of the will and it seems most of them have been unsuccessful in their endeavors. After everyone packs into one room, the lights flash off and someone kills Marcos (for really this time) by stabbing him in the stomach. The body promptly disappears and the gate outside becomes electrified, trapping everyone inside. The two maids (Hortensia Santoveña and Celia Viveros) have a seance in the cellar and call up the dead man's spirit, who shows up on occasion to warn people. A doctor is shot, Marcos' nutty "vampire" brother Sergio aka Julius (Yerye Beirut) is still lurking around causing trouble, there are three dance sequences (Roberto Cobo does some crazy dance, María Eugenia San Martín does the hula and they do the mambo together) and during the stirring (not!) finale, someone goes around bonking people over the head with a mallet (complete with a cartoon sound effect). Everyone's eventually tied up to some spiked contraption as our hero Carlos aka Harold (Héctor Godoy) battles it out with a mystery killer whose identity won't be surprising anyone.

Just like the original, this is little more than a bunch of people frantically running around making goofy faces. It's talkier than the first and almost completely deemphasizes the dime store horror props. A few moments, such as when the policemen sees the same crew gathering together and starts to dust off his gun and magnifying glass in preparation, are mildly amusing. During one scene, a dog gets fried on the fence and there's a weird hallucination scene where Aldo (Fernando Soto) is drugged and envisions an angel strumming a harp and a demon poking him with a pitchfork while he's dressed in a flesh-colored suit and bent over fire (!) I did get to see a great quality version in its original language with fan-made subs (meaning the cast don't sound nearly as annoying), but it still isn't very funny. Or as Sergio so eloquently puts it "Todos idiotas!"

There's no official U.S. release for this one, but you're not missing out on anything. Though Crevenna is given sole credit for his dirección in the credits, Alberto Mariscal is listed as co-director (which may be more like "assistant director" here). Ramón Bugarini, Lulú Parga, Joaquín García Vargas, Armando Arriola, Pompín Iglesias, José Jasso, Pascual García Peña and Elsa Cárdenas all return from the first film in the same roles.