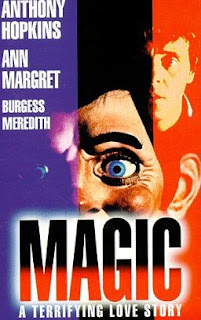 Looking over the talented cast and crew, one is likely to expect more than what this major studio film is actually able to deliver in the end. It's the good old "Is he/she actually insane or is the dummy / doll / mannequin actually living" scenario (which had already basically been perfected in the great Michael Redgrave segment of the 1945 British anthology DEAD OF NIGHT) played out here with disappointingly predictable results. Anthony Hopkins (who'd just appeared in the likewise disappointing AUDREY ROSE) is able to rise above the material as timid, socially awkward magician Corky Withers, a man crippled with insecurity who's only really able to come out of his shell and achieve a level of professional success through his ventriloquist's dummy Fats (voiced - unnervingly so - by Hopkins). While on the verge of achieving fame on the talk show circuit thanks in part to his no-nonsense agent Ben Greene (Burgess Meredith), a push-pull effect begins between the outgoing Fats and the introspective magician controlling him; the doll being a outlet for Corky's schizophrenic personality to simultaneously surface and spiral out of control without really being detected by the masses.
.
Right when his career is beginning to take off, Corky retreats to a secluded area in upstate New York in an ill-fated attempt to get away from the pressures of show business (and avoid his agent's insistence on him taking a medical exam to secure a job). There, he gets back in touch with Peggy (Ann-Margret), the attractive, popular girl who never really gave him the time of day during his youth but still managed to make an impression on him. Peggy ended up settling for a quiet life - owning some rental cabins in the middle of nowhere with her temperamental husband Duke (Ed Lauter) - and is looking for a way out. She and Corky become lovers, but the relationship is obviously doomed right from the start. There's just a touch of violence and a couple of murders, though director Attenborough aggressively refuses to turn the film into an obvious shock show; consistently downplaying suspense and terror through anti-climax. What's left is a predictable story of mental illness using the obvious metaphors and a bland, doomed love story traveling down a well-worn path.

It was based on a novel by William Goldman (who adapted his own work here), has a Jerry Goldsmith score, an effectively gloomy look thanks to cinematographer Victor J. Kemper and is well-budgeted and professionally made. There are some effective creepy moments, the doll design - fashioned to look somewhat like the leading actor - is excellent and most of the cast (particularly Hopkins and Meredith) acquit themselves well. Regardless, the level of subdued familiarity - and the obviousness of the entire premise - will be a turn off to certain viewers.