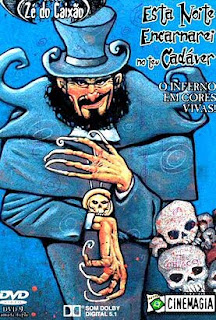 After a brief recap of the conclusion of AT MIDNIGHT I'LL TAKE YOUR SOUL (1964), there's a wild, ingeniously-edited flurry of opening credits announcing the cast and crew, which features snippets of scenes we're about to see accompanied by distorted screams and moans, as well as new scenes showing that Zé do Caixão has not only been absolved of his crimes due to lack of evidence but also gets surgery to restore his vision. Now he's ready to relocate and begin again in his search for the "superior woman" to bear his child; maintaining his belief that the only way to achieve immortality is through blood and heredity since there's no afterlife. Zé arrives in a new village (hilariously, everyone there runs inside and hides when they hear he's coming), opens up his own funeral parlor, buys a mansion on the outskirts of the village and hires a facially-deformed hunchback named Bruno (Nivaldo de Lima) to assit him. The two immediately abduct six attractive young women, all of whom are rumored to be atheist and might be sufficient to bear a child to Zé's satisfaction. He keeps them prisoner in a hidden room in his home (all dressed in see-through negligees) and unleashes a horde of tarnatulas on them as they sleep to see who holds up the best under pressure. Pouty-lipped heiress Marcia (Tina Wohlers) manages to maintain her cool the best, so Zé decides to do away with the other five. One is strangled by the hunchback and has her face melted with acid, and the other four are led into a secret room, where a secret panel opens and dozens of snakes slither out!

Unfortunately, Zé discovers that Marcia has fallen for him and since he views love as a weakness he decides to dismiss her; letting her live because he knows she won't go to the cops and he can use her to help implicate another guy - bald muscleman Truncador (William Morgan) - in the killings. A colonel's (Roque Rodrigues) lovely daughter, Laura (Nadia Freitas), arrives in town just in time to catch Zé's eye. And to his delight, she's a bit of a sadist herself. Her family naturally disapprove of the union, but that's OK. Zé and his hunchback make their point by killing the brother by dropping a huge rock on his head. Laura eventually finds herself with child, but things start to unravel for our despicable mortician when he realizes that one of his original victims - Jandira (Tania Mendonça) - was pregnant at the time of her death. Despite his hatred for most adults, Zé never wants harm to come to a child, because they're fine until adults manage to ruin them later on.

Guilt over Jandira's death leads to a nightmarish vision of hell, and the film suddenly changes from black-and-white to full color for about five minutes. Hell, as seen here, is a bright, gaudy mix of fire and ice. Red-painted men run around sticking people with pitchforks, whipping them and driving nails into their foreheads. Some people hang on upside down crosses with snakes wrapped around them. Steam and ice pour from holes. Walls bleed. Blood drips from the ceiling. Heads and body parts jut out from everywhere. Zé also gets to visit briefly with Satan (who's also played by Marins). When he awakens, everything's back to b/w for the finish, which wraps up with Ze being chased by a torch-carrying mob of villagers through a swamp and finally being forced into accepting the fact that there is a God.

Though this wears out its welcome a bit toward the end and goes on about ten minutes too long, there's loads of interesting and incredibly bizarre stuff going on here to easily hold one's interest. It's better made than the previous entry (the budget seems a bit higher), the dialogue is well-written, interesting and sometimes blackly humorous and Marins (whose voice apparently is dubbed in all of these films) has great presence - and some amazing fingernails - in the lead.

Clips from the film were later recycled in the partial compilation HALUCINATIONS OF A DERANGED MIND (1978) and COFFIN JOE'S VISIONS OF TERROR (1994). Marins would even return as Coffin Joe in a direct sequel 40 years later (!) It - titled either DEVIL'S REINCARNATION or EMBODIMENT OF EVIL - apparently uses footage from both an abandoned 1981 attempt to revive the character along with new footage shot in 2006.