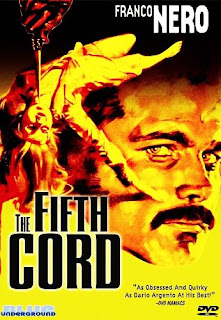 ...aka: Evil Fingers
...aka: Fifth Cord, The
Directed by:
Luigi Bazzoni
All in all, this is a well-done and very visually engaging mystery, putting Franco Nero (playing a lady-friendly, hard-drinking newspaper reporter) center stage for a string of brutal murders. For starters, I'll come right out of the gate and say this has some of the best camerawork (by Vittorio Storaro) I've seen in this particular genre. It might actually be the best from a non-Bava or Argento film; quirky, distinctive, highly stylized and sometimes downright exhilarating. There are a lot of tracking shots used, the night scenes are handsomely shot and there are some really well done killer POV shots that look similar to the ones used in BLACK CHRISTMAS, which possess a kind of almost floating feel. The use of color might be bolder elsewhere and though it's more discreetly used here, it's still used well. In addition, it's sharply edited (smoother and not nearly as jagged as many of the other Italian horrors I've seen from this era), there's a great Ennio Morricone score and good use is made of sound/music cues. I also liked the cast more than usual. Nero might not be the most likeable or sympathetic lead for one of these films, but he's much more interesting to watch than the flagrantly bland George Hilton. Many of the ladies (especially Agostina Belli and Silvia Monti) are gorgeous and they even throw in a few good looking guys for more universal sex appeal. You also get roles played by German krimni star Wolfgang Preiss, Edmund (PIECES) Purdom, Rossella (SLEEPLESS) Falk, giallo regular Renato Romano, Ira von Fürstenberg (from Bava's FIVE DOLLS FOR AN AUGUST MOON) and many other familiar Euro-horror faces.
.
Now the film does lack blood. There's a bit, but not much on the whole. However, most of the murder scenes are well staged and brutal enough that they don't actually need it. Said red stuff usually looks like bright red paint anyway, so I personally didn't even miss seeing it here. The storyline is basically what's to be expected with the genre, with the usual twists, turns, red herrings, secretly linked characters, etc. Regardless, it's well paced and certainly no worse than other films it's frequently categorized with. The film also manages to come to a sensible conclusion instead of completely pulling the rug out from under our feet in a way that insults our intelligence.

I've never even heard of director Bazzoni before viewing this, but his direction suggests that he probably should have had a more substantial career than what he did. A look at his filmography reveals just a handful of credits despite winning an award at Cannes for his film debut in the early 60s. However, he did do what some call a "proto giallo" called LA DONNA DEL LAGO (1965 aka THE POSSESSED aka THE LADY OF THE LAKE) that I have seen praised by many who have seen it. One even said it has a VAMPYR-like atmosphere. He also made something called FOOTPRINTS (aka PRIMAL IMPULSE) that sounds really interesting. I'll definitely try to track these two down and look forward to them based on what I've seen here.
★★★
Posted by The Bloody Pit of Horror at 9:18 PM