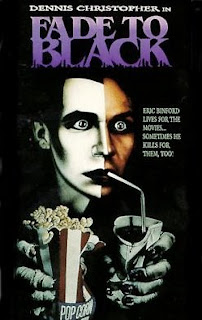 Directed by:
Vernon Zimmerman
Closed-off, movie-obsessed geek Eric Binford (Dennis Christopher), who does errand work at a film studio, is frequently ridiculed by his co-workers (including Mickey Rourke in an early role) and lives with his cruel, wheelchair-bound, domineering aunt (Eve Brent), goes off the deep end and starts murdering people. The novelty here is that he dresses up as his favorite screen villains (movie monsters, gangsters, etc.) and adapts their personalities to do the dirty work. The premise itself is great, but the film is half-baked and badly scripted, with the combination of horror, classic film references and bizarre humor not exactly a seamless one. The film also completely lacks suspense and tension. Some of the murder scenes are unnecessarily intercut with footage from the films (which include NIGHT OF THE LIVING DEAD, CREATURE FROM THE BLACK LAGOON and HORROR OF DRACULA) our killer is imitating and the homages themselves (THE PHANTOM OF THE OPERA, PSYCHO, etc.) are normally too obvious to spark much interest. Christopher (who had just appeared in the hit BREAKING AWAY) is unfortunately rather whiny and annoying (not to mention unsympathetic) in the lead, but some of the supporting players are fine, particularly Linda Kerridge, whose bright presence as a Marilyn Monroe-esque aspiring model nearly lifts this out of the muck. But not quite.
.
Also with Tim Thomerson as a criminal psychologist, Gwynne Gilford as his partner, James Luisi as a cop, Norman Burton, Morgan Paull, Peter Horton and John Steadman (THE HILLS HAVE EYES).
★★
Posted by The Bloody Pit of Horror at 11:36 PM