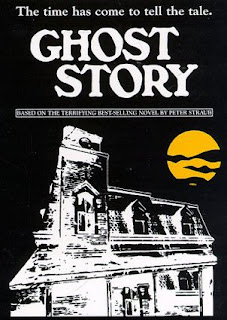 Directed by:
John Irvin
Four elderly men (Fred Astaire, Melvyn Douglas, Douglas Fairbanks, Jr. and John Houseman) are haunted by the ghost of a woman that they murdered fifty years earlier. There's some atmosphere, it's well-budgeted, has a great cast of vets (it was the last feature film role for three of the four leads) and a haunting performance from Alice Krige as a seductive, ghostly woman who comes into the life of one of the men's adult sons (played by Craig Wasson) and makes good use of the snowy New England locations, but at 110 minutes, it's way too long, is pretty slow-going and the dramatic elements are highly uneven. Lawrence D. Cohen adapted the best-selling (and more complicated, far scarier) novel by Peter Straub.
.
★★
Posted by The Bloody Pit of Horror at 5:03 AM

Email ThisBlogThis!Share to TwitterShare to FacebookShare to Pinterest
Labels: ghost