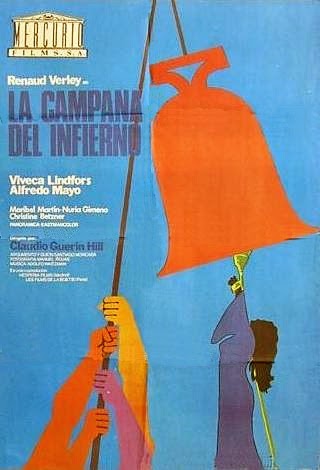 
A nicely-shot, twisted revenge tale of greed, perversity, incest, small-town hypocrisy and insanity. Release from a mental institution after a three year stint, handsome weirdo John (Renaud Verley) returns to take claim on his inheritance, including a huge castle home, after a short stint working in a slaughterhouse (where we’re treated to the sight of real cows being butchered). His wealthy mother had taken her own life years earlier and now there’s a struggle for control of her fortune between John and his aunt Marta (Viveca Lindfors), who thinks he should be sent back to the asylum. She may be right. He’s obviously sick, but his presence is also fueled by the fact he may have been wrongfully committed in the first place, resulting in a bizarre, uncomfortable anti-hero as central character. For the duration of the running time, John goes out of his way to make life a living hell for his aunt, some would-be rapists (including Alfredo Mayo) and his three attractive female cousins (Maribel Martín, Nuria Gimeno and "Christine Betzner" / Christina von Blanc), more than one of whom he’d been sexually involved with in the past, before being sent away.

John plants bugs in people’s homes (and uses what he finds out as blackmail), terrorizes people with bloody practical jokes (including a memorable bit ripping out his own eyeballs) and eventually resorts to rape and murder, trying to apply what he learned in the slaughterhouse in a memorable sequence. Also playing into things are a prophetic, old wise man who lives on the outskirts of town with his young daughter, the construction of a new bell tower at the local church and a well-played surprise ending. Definitely not for everyone, possibly more so to the traditional horror movie fan, this is slow-moving and low on violence and gore, even though the level of perversity (mainly implied) is pretty high. It's very well made all the way across the board.

In a shocking bit of real-life irony, on the last day of shooting award-winning director Guerín fell to his death from the very bell tower used in this film. To this day no one knows if it was an accident or suicide. Juan Antonio Bardem was then brought in to do the final finishing touches. You need to be careful which version of this film you're getting. The copies on those cheaper DVD multi packs are the heavily censored version of the film and use a murky, dark print. The DVD from Pathfinder Home Entertainment is the excellent quality, uncut print you should try to watch.