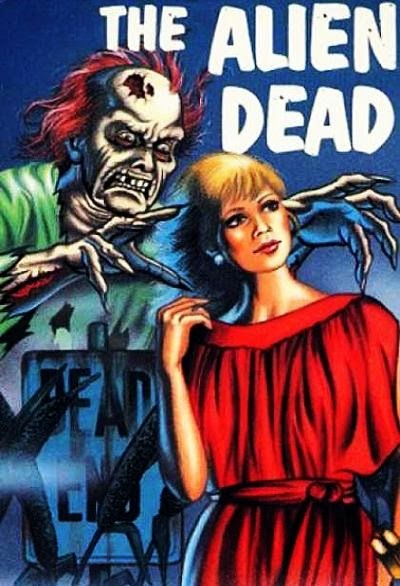 
The starting point of Wellston, Ohio's pride and joy, Fred Olen Ray, is pretty much what you'd expect out of him. Well, it's pretty much what you'd expect out of him with an even smaller budget (12 thousand dollars) than usual. A meteor crashes in a Florida swamp and kills a pontoon boat full of pot-smoking teenagers. They all return as zombies and proceed to attack the denizens of a small town. Lots of silly murders ensue. The first death has a zombie pushing a girl down, then she's suddenly dead. Then a mean, old, frying pan-wielding madwoman and her henpecked husband get pitch-forked and eaten. A scene that reminded me a lot of Zombie Lake has a voyeur cop watching a topless blonde skinny dipper for what seems like an hour before she gets killed. Another guy is ripped apart and eaten. And so and so on, until the uninspired end.

This is Ray's earliest feature available on video (he also made The Brain Leeches back in 1977, but that's apparently little more than a home movie and available only on tenth-generation bootlegs) and it pretty much sets the tone for the bulk of his later work, containing some amateur gore, some silly comedy, some T&A and a name-value guest star from the past (in this case former Flesh Gordon star and serial hero Buster Crabbe as a sheriff) to help sell it to a distributor. Unknown actors Raymond Roberts and Linda Lewis are tolerable as the leads, but this is strictly Grade Z trash with very grainy 16mm photography and laughable zombie designs. A bit of cheapie charm here and there to keep it somewhat digestible. Ray also wrote, produced, did the special make-up fx and shot it (around the Rock Springs/Orlando Florida area). It was originally released as It Fell from the Sky and is also known as Swamp of the Blood Leeches. I wonder if it was originally intended as a sequel to his first film?