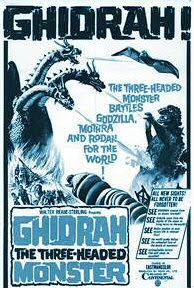 ...aka: Biggest Fight on Earth, The
...aka: Earth's Greatest Battle
...aka: Ghidrah, the Three-Headed Monster
...aka: Godzilla vs. Ghidorah
...aka: Greatest Battle on Earth, The
...aka: Greatest Fight on Earth, The
...aka: Monster of Monsters: Ghidorah
...aka: Three Giant Monsters
Directed by:
Ishirô Honda
The Toho series continues with this follow-up to GODZILLA VS. MOTHRA (made the same year), which also turns out to be one of the best out of the 20+ Godzilla movies made during the 50s, 60s and 70s. It's also a first for Godzilla, who's now a good guy that must defend Earth from the lightning-spewing advances of Ghidrah, the triple-headed dragon, who arrives in a meteor and goes on a rampage. Godzilla ends up getting help from unlikely sources as former enemies Rodan the nuclear pterodactyl and Mothra (giant moth), each take on a head. This has everything Japanese monster buffs want in a movie and the Ghidhra design is pretty cool. Ghidrah returned in MONSTER ZERO (to fight Godzilla and Rodan) and GODZILLA VS. GIGAN (to fight Godzilla and Angillus), and never won a single fight.
Ghidrah: always the bridesmaid, never the bride.
★★1/2
Posted by The Bloody Pit of Horror at 7:43 PM