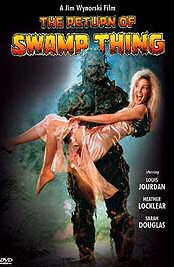 Directed by:
Jim Wynorski
One of Wynorski's most expensive movies is also, ironically, one of his worst. Dick Durock is likeable enough as the title good guy in this unfortunate comic mess, which is a far cry from the DC Comics and even the OK, but not-so-great, 1982 Wes Craven movie. Le Swamp Thing must battle the evil Dr. Arcane (Louis Jourdan) again, who's camped out in a secluded Bayou mansion patrolled by gun-totting guards. He's aided by an equally evil lady scientist (the ever typecast Sarah Douglas) and the loopy Dr. Rochelle (Ace Mask, fresh from the remake of NOT OF THIS EARTH) in attempting to reverse the aging process. Botched gene-splicing experiments result in mutant human/animal beasts that are locked away in the basement lab. Arcane's pretty, but incredibly stupid, stepdaughter Abigail (Heather Locklear, who actually won a 'Worst Actress' Razzie Award for this role!) is one of the targets of the experiment. She's plant obsessed and a vegetarian, which makes her a perfect love interest for our mossy hero. Low point might be her cracking a stupid T.J. Hooker joke.

Well, the costume is great and Durock, Jourdan and Douglas are good, but unfortunately there isn't enough material here for a feature film, and too much time is spent showing the misadventures of a pair of irritating (to put it mildly) little kids, inbred backwoods idiots and jerky survivalists. Joey Sagal, Monique Gabrielle and Jim Grimshaw co-star. Durock reprised the role in a short-lived TV series (shown on the USA network). A kids cartoon show and action figures were also made.
★1/2
Posted by The Bloody Pit of Horror at 5:17 AM