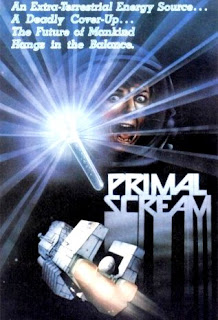 Directed by:
William Murray
Futuristic P.I. Corby McHale (Kenneth J. McGregor) narrates this feature length flashback about what happens when he takes on a case involving a troubled blonde (Julie Miller) who's targeted for murder. It's 1993 and her brother is involved in marketing some kind of top-secret energy catalyst called HELLFIRE (also the shooting title) that ends up causing victims to disintegrate, leaving only a pile of dust. There's a corrupt company behind all of it who'd rather kill than to have the secret exposed. So far, so boring. Ten minutes into this (after an assassination attempt, an exploding space station and a double impalement during sex) I figured the loose ends would be tied up somewhere, but they never are. In fact, nothing in this spoofy mess makes a lick of sense. There are so many pointless characters that the motivations of the villains are constantly muddled, the performances are terrible and it can't decide whether it wants to be action, sci-fi, horror or comedy. God awful!
Score: 1 out of 10
Posted by The Bloody Pit of Horror at 2:21 AM