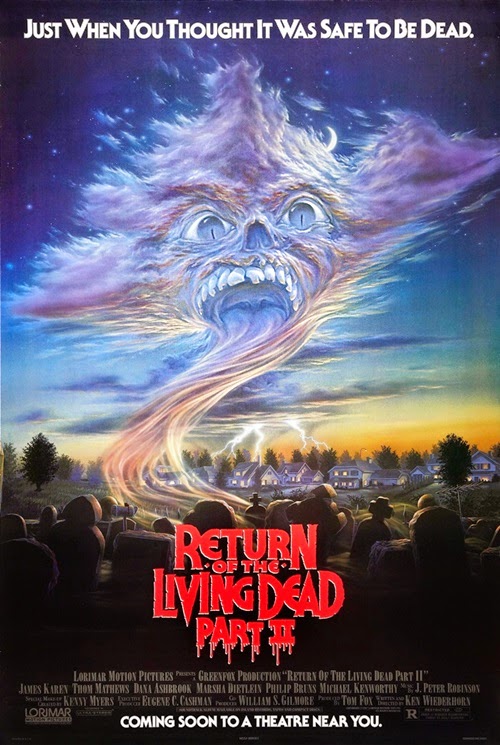 ...aka: Revenge of the Living Dead


While the original did an excellent job bringing a sense of humor to the modern zombie film without short-changing the horror in the process, this mediocre sequel is far less successful. A couple of bullies pick the wrong military drum to start poking sticks at, release a toxic chemical and once again unleash the brain-hungry brain-dead from their graves, who descend upon an unfinished and ever-expanding suburban tract home development. How Spielbergian of them. James Karen (one of the best character actors in the business, though directed to go as annoyingly over-the-top as possible here) and Thom Mathews both return from the first film, though playing completely different characters (Karen an experienced grave digger; Mathews his frustrated new protegee), though one quips about having a feeling of "deja vu." They, along with Mathews' irritatingly fidgety girlfriend (Suzanne Snyder) are in the cemetery when the zombies start popping up, so they take off and end up teaming (sort of) with one of the kids who found the canister (Michael Kenworthy), his bitchy older sister (Marsha Dietlein), a friendly cable installer (Dana Ashbrook) and a senile doctor (Philip Bruns). The military gets news about what's going on and order an evacuation, but the principals gets trapped inside their barricade with no way to escape.

The zombie / gore make-up is excellent this time out, and there's a fun supporting role for Bruns, who helps relieve some of the tedium in his comic role. The production values are also pretty slick and there's plenty of brainless action to keep it moving along. Unfortunately, most of the humor is stale, forced and juvenile this time out. Come on now... a Michael Jackson zombie? Ok, I'll admit. I actually laughed at that. But the majority of the characters are annoying assholes and it's nowhere near as scary, funny, entertaining or inventive as the original.

Director Wiederhorn also did the above average Nazi zombie film SHOCK WAVES back in 1975, which, despite being pretty rough around the edges and a much lower-budgeted affair, is superior to this one. Watch for small roles played by Mitch (Shocker) Pileggi and Forrest J. Ackerman ("Famous Monsters") as a zombie. Several other people from the original also appear here, including Brian Peck (who played Scuz in the original) as various zombies, Jonathan Terry (army colonel), plus the return of Tar Man.

the ROTLDII poster always reminded me of FRIGHT NIGHT's.

had this one on tape, so i saw it a lot. last viewing was some point in the late '90s, after a long interval. was never that great a movie to begin with, but by then i found it especially laborious & grating. enough time has passed that i wanted to take another look, except the DVD has a replacement score. oh, well.

gonna watch the original on blu-ray tonight, after dusting the cobwebs off my TV.

ugh. this did not get better with age. after marveling at the presentation (shout-fac blu, obviously leagues better than my old tape) i just wanted it to be over. fell asleep with 20 minutes left, and didn't even back it up -- seeing the end while listening to the director's commentary sufficed. about that: weiderhorn sez he's not a horror fan, and was trapped in it after SHOCK WAVES. his completed spec script had nothing to do with ROTLD; changes were made when the sequel offer came up.

Last time I tried watching this I also turned it off. The overacting (not the actors' faults as they were clearly coached to do it) was grating on my last nerve! This was one of my childhood favorites, probably because it's one of the first zombie movies I ever saw, but I'm afraid it hasn't aged well at all outside of the work of the fx crew.

I used to get the Leonard Maltin books when I was younger and remember him rating this the same as the original and wondering WTF he was smoking even back then. And I wonder the same about all of the people I bump into online who insist *this* is either the best sequel or even better than the first. It seems Part 3, which I find a LOT better than this one, gets more online hate than Part 2 and I can't quite figure that out.

aside from his SNDN sequels, i don't really remember any of yuzna's earliest movies very well (looking for something to watch i always skip past my BRIDE & SOCIETY blus). people get on ROTLDIII's case for not feeling like part of the "series", but so what? II wasn't written as a sequel, and tonally it's nothing like o'bannon's film. even taking nostalgia into account, i can't fathom liking II more than the original. unbearable.