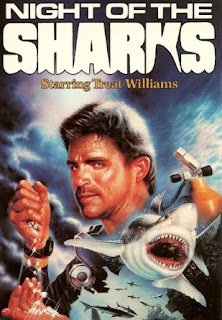 
"Italian International Films Presents" a JAWS copy with MIAMI VICE-style trappings, lots of boats, helicopters, explosions, bad floral-print clothing and palm trees. Treat Williams is David Zeigler, an unshaven shark hunter living in Cancun with his beautiful girlfriend Juanita (Nina Soldano) and cigar-chomping black sidekick Paco (Antonio Fargas), who dresses like Colonel Sanders. A millionaire playboy (John Steiner) sends out some thugs to get back a stolen disc that David's brother gave him before getting gunned down. On it is information about the whereabouts of two-million dollars in sunken diamonds. Meanwhile "Cyclops," a giant one-eyed shark, eats anyone who gets near the water. Incidentally, the killer shark has nothing to do with the rest of the plot, and is probably in it so the video could be in the horror section of video stores when they released it. It's an Italian/Mexican/Spanish production that seems to have been shot in English (even the Italian actors) and the acting isn't bad, but it's pretty boring and sometimes even hard to follow. Good funky electronic music score, though.
.
Janet Agren has very little to do as the ill-fated ex-wife of the main character (well, she does get to participate in one of the scant horror scenes but that's about it); ditto Christopher Connelly as a priest. The director, who also previously made at least two other killer shark movies (BERMUDA: CAVE OF THE SHARKS in 1978 and ENCOUNTER IN THE DEEP in 1979) used the alias "Anthony Richmond" for this one.