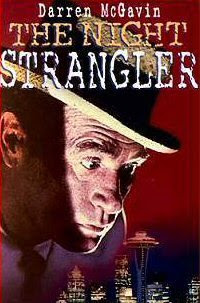 
Second pilot episode (following THE NIGHT STALKER) to the TV series Kolchak: The Night Stalker (1974-1975) is almost as good as the terrific original. Driven out of Las Vegas by the corrupt officials, reporter Carl Kolchak (Darren McGavin) and editor Tony Vincenzo (Simon Oakland) have relocated to Seattle, Washington. Both begin working for The Daily Chronicle, a newspaper owned by stern publisher Llewellyn Crossbinder (John Carradine), who reminds the boys, "Mind your p's and q's!" A new string of murders, all young women, begin in the Pioneer Square district; each victim having been strangled to death by a madman so strong he crushes their necks. A little blood is also removed with a syringe. Doing some research, Kolchak discovers that the same exact style of murders have been going on in the city (6 killings every 23 years) as far back as 1889! Witnesses claim the killer, an alchemist old enough to be around for the Civil War, who lurks around the shadows of the city in a top hat and trench coat, takes up residence in an underground city with the skeletal remains of his long dead family and is described by one witness to have "the strength of ten men and the face of a corpse!"


Again blessed with a well-balanced script by Richard Matheson, this has ample does of comedy and terror and follows the same format as the first film without losing much of the freshness of the concept. The ending, which resolves the story in convoluted 'mad scientist' terms is slightly disappointing, but otherwise, this is an excellent follow-up. And the supporting cast is first-rate; Jo Ann Pflug as a fast-talking dancer/psychology undergrad, Wally Cox as a researcher, Scott Brady as the police captain who wants to keep the murder spree a secret, Al ("Grandpa Munster") Lewis as an unshaven drunken tramp living underground and Margaret Hamilton as an anthropology professor who explains how to make "the elixir of life." Also with Richard Anderson, Nina Wayne, Virginia Peters, Ivor Francis and Anne Randall. The ending, with Kolchank, Vincenzo and Pflug on their way to New York City, and presumably more cases of horror and supernatural phenomena, is a set-up for the TV series.