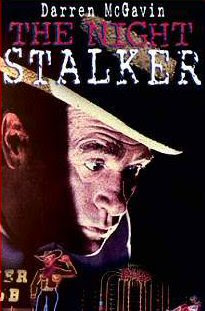 
Right after his long stint working on Dark Shadows (the TV show and two theatrical releases) Dan Curtis returned to produce this excellent TV movie, which benefits from top-notch acting, good location work and a witty, suspenseful script by Richard Matheson (based on an unpublished Jeff Rice story). He also brought over talented British filmmaker John Llewellyn Moxey (HORROR HOTEL) to direct. In Las Vegas, unstoppable reporter (and, as his harried boss puts it, "amateur bloodhound") Carl Kolchak (Darren McGavin) gets assigned to cover a story involving a young woman found dead… completely drained of blood and with puncture marks on her neck. More victims follow and fit the same m.o., as Kolchak tries in vain to convince the authorities that what they are actually dealing with is a 70-year-old, super-strong vampire named Janos Skorzeny (Barry Atwater). He ends up right in the middle of "the largest manhunt in Las Vegas history," but the district attorney (Kent Smith), county sheriff (Claude Akins), police chief (Charles McGraw) and others want to cover it all up and "don't want to cause a panic." Kolchak is just interested in uncovering the truth and bears witness to the vampire robbing a blood bank, taking dozens of bullet hits, throwing cops around with ease and keeping a victim tied to a bed in his home for quick late-night snacks.


McGavin is great fun in this role; energetic, quick-witted, no-nonsense, sardonic, pushy, courageous… and his rapid-fire sarcastic exchanges ("What do you want? A testimonial from Count Dracula?") with flustered, screeching editor-in-chief Tony Vincenzo (Simon Oakland) are highlights of the film. Atwater's silent bloodsucker is pretty creepy, too, especially in close-up. Carol Lynley is pretty much wasted however as the token lady in distress. Also in the cast are Ralph Meeker, Stanley Adams, Elisha Cook, Jr., Larry Linville and Virginia Gregg.


After the success of this TV movie, Curtis, followed with THE NIGHST STRANGLER, the second pilot film for the eventual television series Kolchak: The Night Stalker, which lasted from 1974 to 1976. The MGM DVD contains both films and two interesting interviews with Curtis.