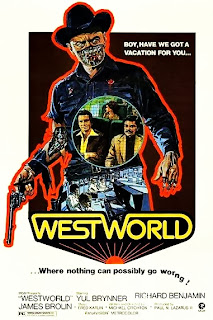 
The Delos Corporation has created "The most exciting vacation spot in the history of man," or what they like to call "The vacation of the future... today!" For just 1000 dollars a day, guests have their choice of three distinct destinations. First, there's "Medieval World," a reconstruction of the chivalry, excitement and romance of 13th Century Europe. Then there's "Roman World;" a recreation of the decant, lustful and sensual Pompeii. Finally, there's "Westworld," a recreation of the lawless, unpredictable American frontier of 1880. Guests take a hovercraft deep into the desert, where they're then whisked off to the world of their choice. What makes this so special? Well, each town is populated with like-life robots designed and programmed to make your stay exciting, thrilling and memorable. Aside from imperfect hands, the advanced androids can pass for human and they talk, walk, fight, bleed, have sex, ride horses, serve specific functions and do all the other things that you and I do. Even all of the animals that populate the areas are robotic. Everything is being closely monitored by various scientists and technicians, who stay busy programming the machines, monitoring the action via cameras and, late at night, sweeping in and clearing out any damaged or malfunctioning robots. A voice over the loudspeaker keeps reassuring guests that "nothing can go wrong." Naturally, that turns out not to be the case.

Chicago businessman John Blane (James Brolin), who's already been on a previous Delos vacation, decides to treat his buddy and co-worker Peter Morton (Richard Benjamin), who's just been taken to the cleaners by his ex-wife, to a trip to Westworld. The two guys are given an appropriate wardrobe and all the things they'll need to get by in the dusty Wild West town, including guns. The guns are real guns and take real bullets, except they've been equipped with a censor that won't allow them to fire at anything with a high body temperature to ensure no human uses it on another. As far as the robots are concerned, just gun 'em down as you please. John and Peter live it up for a little while, drinking it up at a local saloon, engaging in bar brawls and shoot-outs, visiting a cathouse (run by Star Trek star Majel Barrett) and even springing each other from jail... but then the robots start behaving strangely. Many of the models have been showing rather peculiar signs as of late; frequently breaking down and occasionally even overriding their programming; prompting the chief scientist (Alan Oppenheimer) to muse, "Doesn't anything work around here?" Still, the Delos staff decide to let the current crop of visitors finish out their stays until closing down for maintenance.

Things start going seriously haywire when robots in all three worlds begin to ignore their commands. Some simply fall over "dead," while others become violent and then start killing not only the other robots but also human guests. All hell breaks loose in Roman World, while In Medieval World a visitor (Norman Bartold) ends up on the wrong end of a knight's sword vying for the attention of the kingdom's queen. In Westworld, John and Peter manage to get on the bad side of an emotionless, black-clad gunslinger (Yul Brynner), a newer model with heightened sensitivity programming, who seems to have the very non-robot-like ability to hold a major grudge...

Being an early 70s sci-fi flick, one may automatically expect elements of Westworld to have dated poorly, but that turns out not to be the case at all. This has actually dated brilliantly and holds up extremely well thanks to an extremely imaginative, intriguing and not entirely implausible premise. While the idea of such a vacation sounds extremely appealing in theory, a certain nagging morality is always in the back of our minds as we examine the scenario. It is really all that healthy to get a thrill out of fake-killing life-like androids at random? If you're in a relationship, is it really cheating to have sex with a robot? One could also imagine this being troublesome for certain types of people; addicting even. When you can basically have your run of an entire world, get all your needs met and get everything you want, returning to the 'real world' and dealing with all of the pressures and disappointments and stress would have to be a depressing downer, right? Crichton's script is smart enough to make passing nods at some of these ideas to ensure we're fully engaged in this idea, even after the movie has ended.

Not just reliant on its creative central idea, Westworld is also very funny at times, exciting in its action and suspense scenes and actually pretty damn scary during the final third. Western movie regular Brynner (The Magnificent Seven) is absolute perfection in his role and gives a superbly chilling performance here. It's impossible not to think of The Terminator (1984) seeing Brynner's cold, steel-eyed gunslinger robot in relentless pursuit of our hero, complete with pixilated robot POV shots and use of heat sensory to track his prey. And just like Schwarzenegger's Terminator, the Gunslinger here doesn't go down very easily. It's also difficult not to think of the later Crichton-penned Jurassic Park watching this, as both feature high tech resort / amusement parks where visitors become trapped inside and are killed by the very attractions they've come to see.

A deserving critical and commercial success upon release, this prompted the sequel Futureworld (1976) three years later, which also featured Brynner reprising his role. In 1980, a TV series called "Beyond Westworld" was produced, but low ratings led to only three of its initial five episodes to air before the plug was pulled. In 2007, a remake was announced to be directed by Tarsem Singh (The Cell) and star Arnold Schwarzenegger. That never happened. In 2011, Warner Brothers announced plans to remake it as a feature film. That also never happened. Just a few months ago as of this writing (August 2013 to be exact) HBO announced plans to do a television series pilot based on the premise, to be directed by Jonathan Nolan and co-produced by J.J. Abrams. Though this original film is a fine stand-alone, there's really a lot of potential for further expansion upon this material if someone manages to do it correctly.