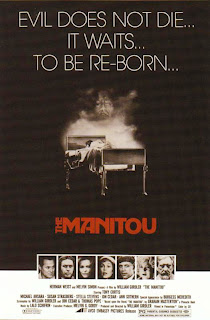 
After completing the 50,000-budgeted ASYLUM OF SATAN (1971) and the likewise very-low-budgeted Ed Gein-inspired THREE ON A MEATHOOK (1972), Kentucky-born director William Girdler's career quickly began to rise. He made the black-cast possession flick ABBY (1974), which garnered a lot of attention and press when Warner Brothers - the makers of THE EXORCIST (1973) - sued for plagiarism. Despite the fact Abby had to be withdrawn from theaters early (the case wouldn't be settled [in Girdler's favor] until years later), it still managed to rake in a staggering 4 million dollars in about a month on just a 200,000 dollar investment. Girdler's next venture, GRIZZLY (1976), did even better by cloning the exact formula (plot, characters, etc.) that had made JAWS (1975) such a massive success. Its follow-up, DAY OF THE ANIMALS (1977), also did quite well. Even outside the genre, Girdler struck gold with such films as Sheba Baby (1975), a popular vehicle for blaxploitation queen Pam Grier. By the time The Manitou was made, Girdler had both the clout and the finances to put together a film with rather slick production values and afford a cast of big name actors like Tony Curtis and Burgess Meredith. The Manitou was also profitable, but Girdler tragically died January 1978 in a helicopter crash while scouting Philippines locations for his next film. It's hard to tell what else he would have come up with had that not happened, but I'm sure his stock as a horror filmmaker would have ended up more pronounced than it is now.

Based on a novel by Graham Masterson, The Manitou tells the highly unusual story of an Indian curse and rebirth. What is so unusual about that, you ask? Well, for starters the Indian decides to be reborn on the back of our heroine's neck! San Francisco Karen Tandy (Susan Strasberg) shows up at the hospital with a lump on the back of her neck. The growth is increasing at an alarming rate: 7.3 millimeters per hour, and X-rays reveal that the "tumor" resembles a human fetus. Karen reveals that it moves, or shifts, like someone trying to move over or get comfortable in bed. The physicians examining her; Dr. Jack Hughes (Jon Cedar) and Dr. Robert McEvoy (Paul Mantee), are completely perplexed about what this may be. Dr. McEvoy, the hospital administrator wants to keep the whole thing hush-hush, while Dr. Hughes wants to go about it the same way he'd go about treating a cancer patient by operating and removing the tumorous, malignant growth. They go ahead and schedule the operation for the following day.

Meanwhile, Harry Erskine (Curtis), a bogus psychic / tarot card reader with a fake 'stache, just finishes up with an addle-brained old client. After finally getting rid of her, he tries to kick back with a beer and some disco music when the phone rings. It's Karen and she needs someone to talk to. Karen is supposed to be 28 years old and there's no way Curtis is any younger than 50 here, so that's quite the unbelievable match. Maybe even less believable is that Karen would be in the mood for sex with her scam artist ex-boyfriend when she has a giant, moving lump on the back of her neck that's scheduled to be hacked off in a day. Nevertheless, the two spend the night together in which time he decides to read her cards (which spell death each time) and she starts speaking in a strange dialect in her sleep. He drops Karen off at the hospital the next day and the surgery ends up going haywire when Karen awakes from her anesthesia and some strange force makes the doctor cut his own wrist with the scalpel.

Harry isn't really having it any easier. One of his elderly clients shows up for a reading, says the same strange line ("Pana Wichi Salitu") Karen did in her sleep, floats down the hallway and then gets thrown down the stairs to her death. Since Dr. Hughes is still stumped, Harry goes to Amelia Crusoe (Stella Stevens), the psychic who taught him everything he knows. Amelia's now retired from that line of work and settled down, but decides to help, anyway. Karen's aunt, Mrs. Karmann (Ann Sothern), agrees to let Harry bring Amelia over to conduct a séance. That ends up not going too well as a black, oily wooden Indian head pops out of the table, wind blows open the window and a bolt of lightning strikes and blows up the table (?) They get enough information from that to realize that what they're dealing with is the spirit of an ancient and powerful Indian medicine man who wants to be reborn. A trip to archaeologist Dr. Ernest Snow (Meredith) reveals that the Indian saying means "My death foretells my return" and that a manitou, or immortal spirit, can be reborn at any time or place in the future or past by impregnating themselves in the body of a human or animal.

At the hospital an attempt at laser surgery backfire when the laser goes haywire and starts blowing stuff up in the room. Karen shrieks like a banshee and starts speaking in a husky voice. Since Snow recommended fighting fire with fire, Harry runs off to South Dakota to locate a living medicine man who can possibly defeat the dead one. John Singing Rock (Michael Ansara) fits the bill and decides to help if a 100,000 dollar donation will be made to an Indian charity. When he finds out he's going up against Misquamacus, "the greatest medicine man of all" he has to pull out his whole arsenal of tricks. Immediately before the birth, John encircles the bed with sand which successfully manages to trap the Indian (still in diminutive form and played by a dwarf) inside. However, he is able to use his powers to resurrect the corpse of an orderly he's just skinned alive to come after the others. Why he didn't use his powers to get the corpse to move some of the sand away so he could escape is anybody's guess. And if you were posted on guard in the room with the corpse of one of your coworkers plus this monstrous little creature, could you fall asleep?

Misquamacus resurrects a lizard demon, manages to deep freeze the entire operating room floor, decapitates the night nurse, blows up a typewriter, threatens to collapse the whole hospital and tries to call forth a master demon equivalent to Satan that could cause worldwide devastation.

For the most part, this is a pretty typical post-Exorcist / Omen flick which offers a slight new spin on the formula and has some good make-up fx from Tom Burman and sincere performances from much of the cast, particularly Curtis and Ansara. The ending, however, featuring purple lasers, lightning bolts, fireballs, meteors and giant eyeballs, is a complete laugh riot. Some of the dialogue and situations are also unintentionally hilarious. Gichi Gichi Manitou-Ay. Manitou of the Machines, hear me, hear me!

I'm not sure exactly why but this web site is loading incredibly slow for me.
Is anyone else having this issue or is it a issue on my end?
I'll check back later and see if the problem still exists.

First time I've ever heard this was loading too slowly. Not sure what the problem could be either.