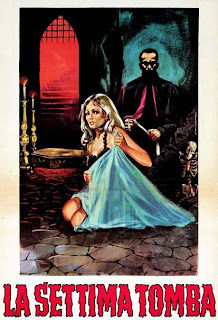 Extremely-rare and long-forgotten; this Italian horror / mystery (with a very old-fashioned 'old dark house' plot) has never been officially released to DVD or VHS. A murky bootleg copy which appears to have been videotaped off a TV screen some time during the 80s is sadly all that's available at the moment (though some custom English subtitles [thanks "NIKKO!"] are at least attached). Though I wish I could say that this is some kind of unjustly neglected gem that doesn't deserve its obscurity, it really isn't. Plot-wise, the film is dull and highly predictable, it's stagy and talky, it's very tame even for its era, the cast is pretty forgettable and there's next to nothing in the way of visual style or atmosphere (one aspect known to at least partially redeem some of these older, poorly-written [or poorly-dubbed] b/w European cheapies). Also somewhat disappointing is that much of the horror content is either a smokescreen for other goings-on or, as in the case of a woman temporarily speaking in a dead man's voice, not even followed up on. 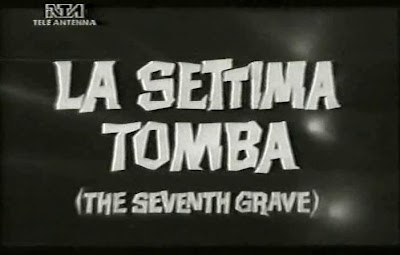 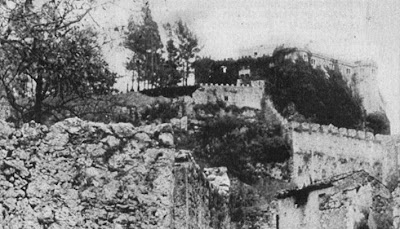 Things begins as three Americans; brothers Robert ("John Anderson") and Fred ("John Day" / Gianni Dei) Jenkins, and Robert's lover Mary ("Kateryn Schous"), show up via stagecoach in 'Old Scotland.' They stop by the Rooster Inn for dinner, agree to give a ride to a young barmaid ("Germaine Gesny") who works there (she's the owner's daughter and headed to the same destination) and go to Nofis Castle for the reading of a will. The castle's former owner, scientist Sir Reginald Thorne, had passed away three years earlier, and his assistant, Dr. Quick, apparently went mad with leprosy and has been institutionalized ever since. But hey, the place used to belong to Sir Francis Drake and rumor has it there's a treasure hidden somewhere on the premises. Worth risking your life for, eh? 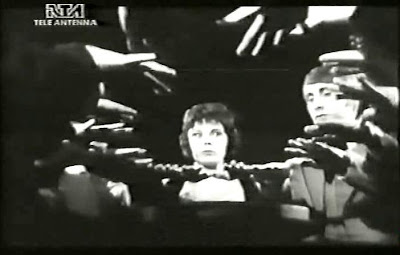 Upon arriving, the three Americans meet up with three other heirs; Colonel Percival ("Gordon Mac Winter"), his psychic daughter Katryn ("Stephany Nelly" / Stefania Nelli) and clergyman Parson Krabb ("Richard Gillies"), as well as notary Bill Elliot ("Fernand Angels" / Nando Angelini), who's in charge of reading the will, and groundskeeper Patrick ("Edward Barret"). As they await the arrival of yet another heir (who never shows up because she's been dead for several months), everyone decides to have a séance. This sequence, with everyone seated in a circle around a table linking hands, is easily the best-directed scene in the entire film and utilizes both different camera angles and (gasp!) actual camera movement. 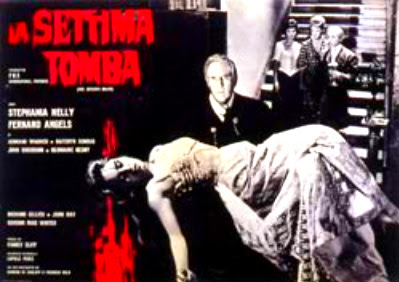 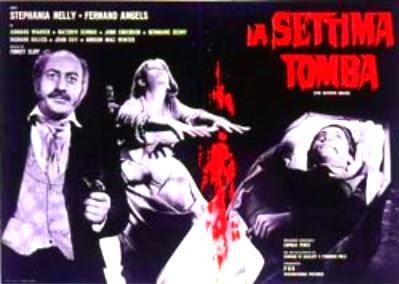 Soon after the séance, a killer dressed in a cloak and top hat, who may or may not have been resurrected from the dead, shows up and starts bumping people off. We learn that Sir Reginald was a murderous mad scientist type who needed blood for his experiments (and whose corpse has strangely disappeared from its tomb), and it's also revealed that a now-possibly-disfigured Dr. Quick has managed to escape from the asylum and is probably lurking the grounds. Police detective Martin Wright ("Armand Warner") shows up to investigate after several people turn up dead. The title refers to the fact that Reginald's body occupies the seventh spot in the family crypt. 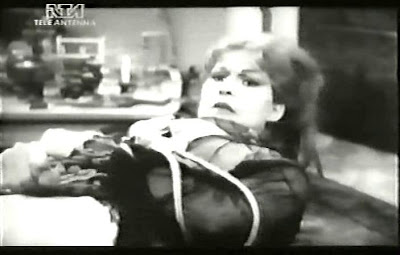 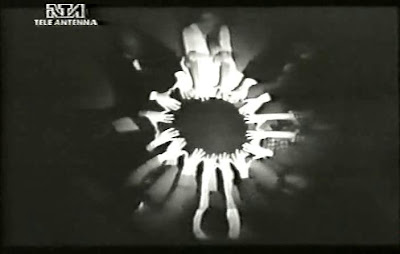 If you're not expecting too much, this is all mildly watchable, I suppose. It's short (clocking in at just 73 minutes) and the film has a pretty haunting music score with usage of Theremin and organ. The sets (including crypts, secret passageways and a laboratory) are sufficient, though unimpressive, and because of the horrible quality of the print I watched, the film has lots of overly bright or overly dark sequences. Not that I hold that against the film or anything, but even in pristine condition, this wouldn't rise above mediocrity. It's certainly not up to par with other Italian productions from the same era. 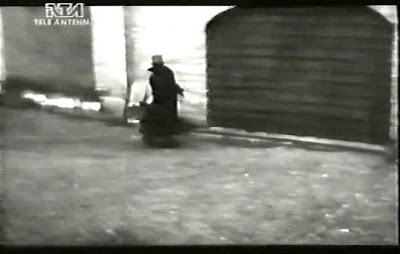 I'm not familiar with anyone in the cast aside from a young Gianni Dei (who'd later appear in GIALLO IN VENICE, PATRICK STILL LIVES and other sleazy genre flicks) and since the names in the credits have all been Anglicized, it's impossible to track down their true identities. Ditto for much of the crew, and the director doesn't seem to have made anything else.

Quirky movie, worth sitting through at least once
Enjoyed the occasionally bizarre subs & unforgettable moments including bits where the notary introduces himself as Elliot then adds "but my friends call me Bill". Huh?
& the whole scene at the Rooster where immediately after we see the "In Old Scotland" title were brought inside & here everyone's speaking Italian
Somehow the owner of the inn and his daughter immediately recognize that their new guests are from America
Even though they're all speaking Italian... and dressed pretty much the same as the other guests. & Hey since they're American what should we serve them?
Why bacon omelette don't ya know
Mmm bacon....

You make this sound more fun than it actually is!