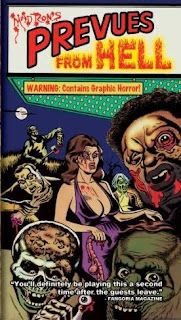 This 83-minute trailer compilation, originally distributed on VHS by Off the Wall Video and now available on DVD through Virgil Films, features loads of cult, gore and exploitation trailers plus dumb "comic" framing scenes that were shot-on-video in a Landsdowne, Pennsylvania theater. Your host is a bespeckled, not-very-animated ventriloquist named Nick Pawlow, whose sidekick "Happy Goldsplatt" at least has an excuse for not being very animated since he's a handheld zombie dummy. The two trade lame wisecracks (Pawlow himself was one of the four credited writers) while the movie theater slowly begins to fill up with zombies patrons. The zombie scenes are a bit more amusing than our hosts. The make-up is very decent and some of the gags (such as a zombie popping out an eyeball and eating it, zombies using a severed arm to drizzle blood on their popcorn, a man getting his eyeballs blown out, etc.) are fun. By the way, "Mad Ron" (played by co-writer, co-producer Ron Roccia) is a zombie who is chained to a movie projector and doesn't really have much to do.

But the trailers themselves are what you came for and this one has some pretty great ones. You get a little bit of everything here, from mainstream releases to exploitation staples to popular cult classics, American and otherwise. Some are very brief, while others last several minutes. Some contain nudity and gore and all of them are from the 60s and 70s, aside from the also-shot-in-Pennsylvania TOXIC ZOMBIES (1980). On of the most memorable is for Orgy of the Living Dead (re-titled 60's Eurohorrors FANGS OF THE LIVING DEAD, KILL BABY KILL and THE MURDER CLINIC), which features a man supposedly driven crazy after sitting through the triple feature. A double-feature of I DISMEMBER MAMA and THE BLOOD SPATTERED BRIDE (both 1972) uses a similar sensationalized angle. Several recycle the "It's only a movie!" campaign from THE LAST HOUSE ON THE LEFT (1972). A trailer for the shockumentary AFRICA BLOOD AND GUTS (1966) features real animals and humans being killed. A somewhat out of place trailer for WILDCAT WOMEN (a 3-D release) provides a shot of straight-up sexploitation. Fangoria Magazine is also plugged several times.